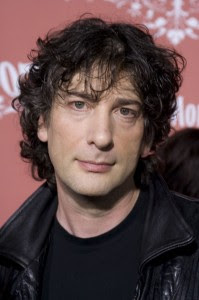 I absolutely adore Mr. Neil Gaiman. He has been a favorite comicbook writer & author of mine for quite some time. Actually, that is not true. Some time does it no justice. I remember the exact moment that he became my favorite man in comics. I was around 13 years old and I was attending the NYC Comic Con at the Javits Center. This was the dawn of the era of Image Comics and everything at the time that WASN'T Marvel or DC was super hot. Valiant, Image and all the other indy comic companies were dominating the popularity charts and I was on the bandwagon. The biggest guests that year at Comic Con were Image founders Erik Larson, Todd McFarlane, and Jim Lee. I was so excited to meet these guys. I brought my Spawn #1 and #2, my Savage Dragon #1, and my Wild C.A.T.s #1 to get autographed. Then we got there, and boy was I in for a surprise.

There were hundreds of comic artists and writers on hand and I had nothing to get signed. So I did what any other 13 year old kid in my predicament would do: I stole anything I could get my hands on!!! I snatched up a Death of Superman trade and had it signed by Dan Jurgens, I stole a 'Savage Dragon' trade paperback and various Spidey issues that Larson drew, an copy of Ghost Rider #18 to be autographed by cover artist Nelson and the creme de la creme of my thievery was a gold foil edition of WildC.A.T.s #1 that I got autographed by Jim Lee (this variant was going for like 300-500 bucks back in the day!!!!). I was loaded for bear and totally content... and then my day got made. 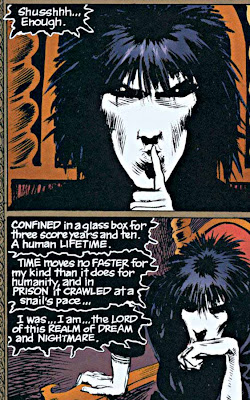 As I was waiting for my boy to get something signed, I noticed a quirky looking individual sitting at a table with some awesome art hanging behind him. He was very dark an ominous looking, and he was surrounded by various Goth dressed teens trying to get their books signed. I immediately recognized 'The Sandman' art hanging behind him. This was Neil Gaiman!!! I had read the first 20 or so issues while hanging in my local comic shop because I heard the series was so good. I never had bought them at that point, but they had become some of my faves and I had planned to start collecting them. The story of  Dream and his Endless family was one of my faves... and here was the man responsible for it right in front of me!!! I had nothing for him to sign, so it was time for me to get grimy again.

I immediately hit the floor trying to find a weak dealer that I could rip off the way a lion stalks a deer. I found a dickbag dealer who had some Sandman trade paperbacks on his table but was a bit more observant than I liked. I sneaked around until I found what I wanted. Sandman #1-8 collected in a TPB. I kept my eyes on the guy until he looked away and then I snatched the book and moved away from the table. I slipped it in my bag and zig zagged in the crowd till I made it back to Gaiman. I walked up and pulled out the book... and was dismayed to see that it was the wrong book!!! It was Sandman: Dream Country, which reprinted issues #17-20 instead. Bollocks.... 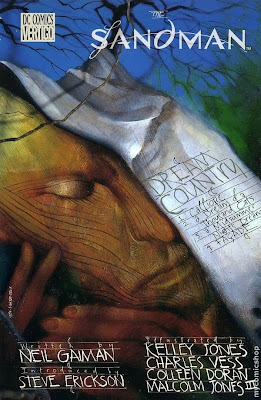 Grrrr... I wanted that #1-8 collection signed, but this was gonna have to do. As I reached the front, I panicked as Gaiman looked up at me and smiled. His floppy hair and relaxed attitude made me relax myself, and then he spoke to me. He asked me "So you like my book huh?" and I almost shit myself. I told him i did, and that these were my favorite issues. That was a lie... I loved all of the issues, but the original 8 were my faves. But he just smiled and said "If you like what we have done so far, wait to you see what we got in the future!!!". he then took my ill gotten copy of Dream Country and signed it. Here is what he wrote: 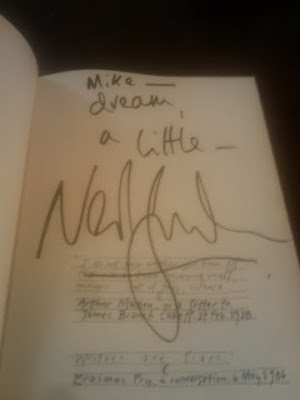 How cool is that! Neil Gaiman, master of the realm of dreams, telling me to "dream a little"!!! My mouth dropped. I said "Wow, thanks so much. I can't believe you wrote that." and he responded "Why? Never stop dreaming. That would really be a boring life. Dream your dreams and then make them reality". I damn near fainted. I shook his hand, began to stagger away, and so began my obsession for Mr. Gaiman's work. 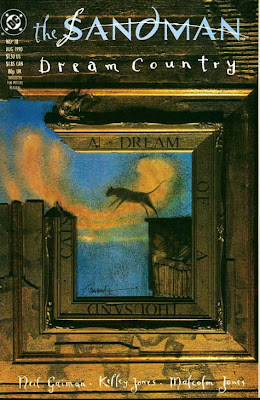 On a sidenote, I have come to love 'Dream Country' so much it hurts. Maybe its because it was the only trade paperback of the series that I owned for a long time, but 'A Dream of 1,000 Cats' is by far my favorite Sandman story ever... I love it!!! Plus, the inscription in my copy of the book means so much to me. I always think of it whenever stuff in my life gets hard and I am challenged. His advice to live my dreams propels me! Early this year, Gaiman did me another favor. Somehow he was linked to an image of Dream and The Endless crew posing in the style of 'The Last Supper' that I posted on CCD. He liked the rendition, so  he tweeted a link to our page. My hits for the day went from 5,000 that day to around 20,000, all because of Mr. Gaiman's tweet. He did it again.... helping me live my dream. Thanks for everything Mr. Gaiman. Keep creating great stories, and I'll keep reading!!!!
Posted by Mike D. at 1:44 AM