I was a huge fan of Jim Henson's show 'The Storyteller'. It was a cool as show that re-told awesome tall tales and stories that you had probably heard before in a new way. The show was a mix of live action and puppets and featured some future stars like Miranda Richardson & Gabrielle Anwar long before they had reached their prime. It is really cool. 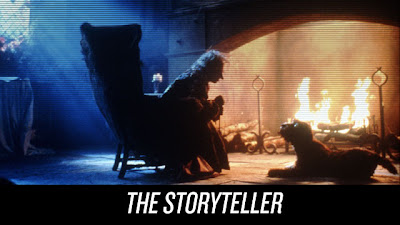 The stories were relayed to the audience by an old man in a rocking chair, the 'Storyteller'. He was accompanied by his puppet dog. They sat by the fire and spun the yarns for the audience to appreciate. The role of the 'Storyteller' was originally occupied by the legendary John Hurt (Alien, Hellboy). He was later replaced by Michael Gambon (Layer Cake, Gosford Park) in the role of narrator. These two guys are some of my all time faves, and they would both go on to play intricate parts in the wildly successful 'Harry Potter' franchise. This show is amazing.

Anyways, here is one of CCD's favorite artists, Tom Fowler, taking on the legendary old man and his dog from the Henson classic. This is hopefully the first step on the journey of a 'Storyteller' graphic novel. Here you go:


Both seasons of this excellent show are available via Netflix Instant Streaming, so make sure you cue them up. Great work Tom!!!
Posted by Mike D. at 10:05 AM