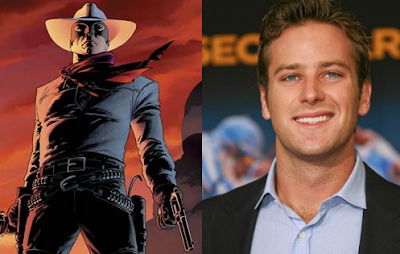 I have to admit I am a bit excited about this. I always liked the Lone Ranger when I was a child, and when I heard that Gore Verbinski got his 'Pirates of the Carribean' star Johnny Depp into the role of Tonto I didn't need much else to convince me. But at the end of the day, the star of the show is always gonna be the guy playing the famous masked man that shouts "Hi-yo Silver... AWAY!!!"... so who better to give the part in Disney's newest version of the classic charcater to one of the rising stars of Hollywood, Armie Hammer.

Hammer is probably most well known for playing both of the Winklevoss twins in "The Social Network". He really brought those characters to life and played the smooth rich kid (s) well opposing uber geek Marc Zuckerman (Jesse Eisenberg) about stealing the idea of Facebook from them. What most people do not know is that Armie almost became a full blown star a few years back when he was tapped to play Batman/Bruce Wayne in the massive Justice League movie that never took off.

That one never worked out (Thanks alot DC Comics... meh!) and Hammer chipped away acting in all sorts of stuff until he hit the jackpot with 'The Social Network'. It's good to see him get a shot at a tentpole film and possible franchise starter. Good luck Armie... Be on the look at for this one sometime in the next few years (I can't believe I just typed that... grrrrrr!!!).
Posted by Mike D. at 1:51 AM