Just Once, I'd Like My Prayers To Be Answered 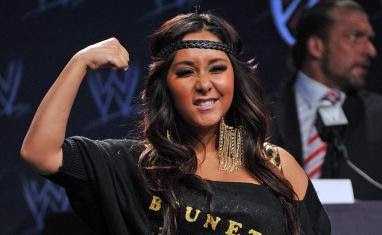 The troll that is Snooki from 'The Jersey Shore' actively wrestled in the WWE's Wrestlemania XXVII the other night... and she survived. Damn, it's so sad that I have to write that sentence. let me clarify exactly what I mean. I am a realist, therefore I fully acknowledge that wrestling is completely and utterly pre-planned. Everyone involved knows whats gonna happen long before they stepped into the ring. With that being said, I am also a realist in the sense that whenever you got people that large flying around the ring, accidents can and will happen. Those moves are highly athletic and high risk. Anyone can get hurt at anytime. Do you guys remember what happen to Owen Hart?

So when I heard that Snooki would be fighting at Wrestlemania... well, lets just say I was hoping she would take a tumble for the worse and severely injure herself. Maybe not death, but some sort of partial paralysis or debilitating injury would have been great. Instead, we got this:

Damn you Vince McMahon... you had your chance to make up for tons of past misdeeds by silencing this ogre an you blew it. Thanks a bunch. What happened to Owen Hart was a tragedy, but if the same fate would have befell The Snookster... well, lets just say I would been just fine with it. Hopefully, this won't be her last time on the show. Next time, maybe someone could jack her up a bit more. Here is to hope.
Posted by Mike D. at 12:29 AM