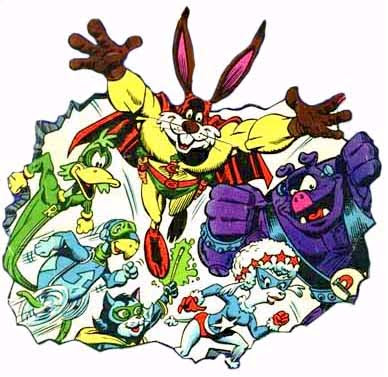 One of the most obscure and awesome comic books that I used to read was Captain Carrot & His Amazing Zoo Crew. This team of anthropomorphic animal superheroes are no gimmick... oh no, these guys are the real deal. They come from an alternate Earth in the DC Comics Universe (Earth 26 in the current continuity, but that changes often). They had their own title that ran for 20 issues, as well as a few miniseries appearances. The fearless leader, Captain Carrot, gets his powers from a meteor tainted carrot. He now grows the carrots to sustain his powers. Other members include Pig Iron, Alley Kat Abra, Rubberduck, Yankee Poodle, Fastback, Little Cheese, and American Eagle.


While it would be easy to dismiss these characters as ridiculous, childish incarnations of superheroes... one should really read these comics before making that kind of judgement. Roy Thomas and Scott Shaw created some memorable characters that have been featured predominantly in other titles such as The New Teen Titans & most recently in Final Crisis. I love these guys so much... make sure you check these guys out if you want to read a real cool alternative comic title!
Posted by Mike D. at 10:54 AM