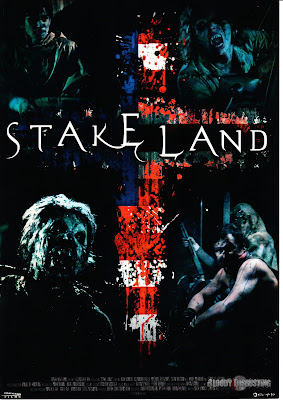 I had the pleasure of watching the wonderful post apocalyptic vampire movie Stake Land last month at a press screening and I loved it. When I heard they were having an advanced screening of the movie at my favorite bar/theater ReRun in Brooklyn, I had to make it happen for a second time. I took my boys Joe Fletch and Roc with me, and we were in for a treat. After meeting Aaron, the curator of ReRun, I found out that director Jim Mickle would be there after for a Q & A. This got me even more excited, because I loved his previous zombie movie Mulberry St and also was a fan of Stake Land the first time I saw it. This was gonna be a great night!


We reached ReRun and got into the back room around 6:15. Adam was behind the bar serving up some great food and drinks to the people who turned out for the showing. The gourmet eats and wonderful beer selection make watching a movie at ReRun a reall treat... you gotta get over there asap! Anyway, it was time for the flick and it was even better the second time around.
A great take on the tired vampire genre, Mickle really did direct a fabulous movie. His writing partner, Nick Damici, plays the character Mister... and lets justs say he was awesome. Rounding out this interesting cast is Gossip Girl's Connor Paolo, Horror scream queen & CCD's favorite horror hottie Danielle Harris, and former Top Gun bombshell Kelly McGillis. They really bring the movie alive, and I will honestly say that it is one of the better horror movies I have seen in awhile. But after the movie ended,  the real fun started.
Aaron opened the door and welcomed in BOTH director Jim Mickle and Nick Damici walked in!!! This Q & A was gonna get even better! There was a short session between the audience and Mickle/Damici in which everyone gushed over the movie. Once it was over, I walked up to Mickle & Damici and asked them if we could conduct our own on camera interview with the duo. They said sure (these guys were so cool!) and here is what came from it:

Very cool... these guys were great. They even posed for a photo with me in the hall after the interview.


The movie opens today at the IFC Center in NYC, so make sure you try to go check it out and support a real good independent horror film. Shout out to Aaron for chosing awesome films to screen at ReRun, to Adam for keeping us hydrated and fed at the screening, to Emily Lu for being the best PR girl EVER, and Jim & Nick for making a great movie... and letting us interview them. All in all a another great night at ReRun. Get out and see this movie!!!!!!!!
Posted by Mike D. at 2:12 PM