Tron: The Next Day by JediRob 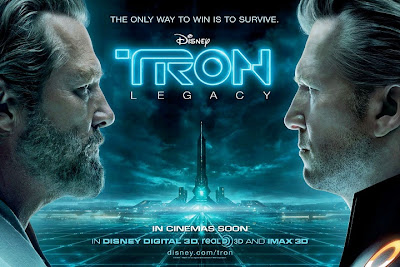 'Tron: Legacy' was one of my top anticipated movies last year. After all was said and done, it wasn’t quite a life changing experience, but with such ridiculous buildup, how could it be. I did enjoy it quite a bit, though. It was pretty much what I should have expected from a Tron sequel, and it was a ton of fun. I dug the Father and Son story, loved that it was a sequel and not just a straight up remake, enjoyed the Daft Funk score (robbed of an Oscar nod) and a showdown between 2 Jeff Bridgeses?! 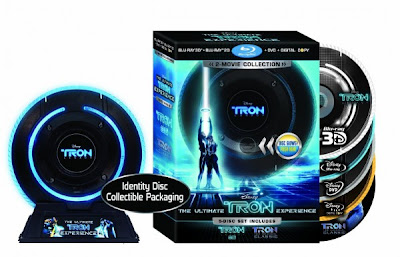 This bit is apparently included on the new Blu-Ray box set that is set to release April 5th.

This set looks very impressive. It comes in a variety of versions; the one pictured being the most ridiculous. It’ll include Legacy as well as the original “Tron” in HD for the first time, after some serious shenanigans from Disney. It’s also supposed to include some deleted scenes, that have yet to sneak their way onto the internet, which may or may not be leading towards a Tron 3. Or T3ON. Or ThReeON. Or something.

Honestly part of the thrill of Legacy was the long timespan in-between the films, so unless it’s in anther 30 years I’m not dying to hop on the lightcycle again. That said I do the think the preview for the upcoming animated 'Tron: Uprising' looks promising. It also takes place between the 2 movies and features the voice of the Tronster himself, Bruce Boxleitner.

I will of course watch a sequel in a heartbeat. And if they do I can only hope that includes the return of Sci-Fi legend David “there are five lights” Warner. He was of course alluded to in the appearance of his son in the surprising Cillian Murphy cameo. And if what I hear about the deleted scenes is true, there is a strong possibility he could be back.

Remember my friends, there's nothing special about you., you're just an ordinary program.
Posted by Mike D. at 1:41 AM