Here is artist Matt Rhodes's take on some of the greatest Disney villians in their most powerful forms. This one is epic: 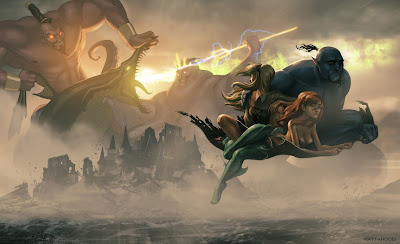 Here is Matt's explanation of the pic:


So, here's the weirdest thing I've drawn in a while. My wife and I have been watching some classic Disney movies and it got me thinking about the short-lived gigantic final forms some of the villains take. Maleficent, Jafar and Ursula in particular spend seconds as massively destructive titans. It got me thinking about what would happen if they were able to spend days, even weeks as apocalyptic monsters. Then I started to wonder what would happen if you had to deal with all three at once. You'd probably want to limp away and wait until they finished one another off.