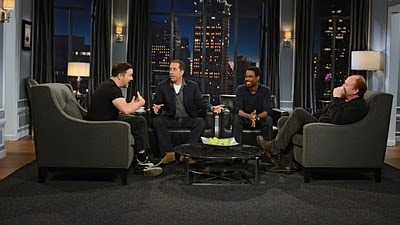 Filmed late last year, the special has the funny men sitting around, casually discussing the intricacies of comedy. From working 'blue', to the structure of jokes and when to stop using material. From the responsibilities of comedians and satisfying an audience (or yourself), to the comedic merits of the song parody 'Sitting on a Cock Cause I'm Gay'.

As an admirer and student of stand-up as an art I am so thrilled to see this kind of talent in one room. I always enjoy hearing Seinfeld talk about comedy, as he approaches it in a really old fashioned manner. I remember him and Chris Rock having one of these talks in Jerry's 'Comedian' film, and it's great to see some more of that. It's just unfortunate we don't have George Carlin with us anymore as he would have been a perfect fit. I am very pleased though to see Louis C.K. included with these heavyweights as I think he's the best working comedian today.

If the special is successful, we can expect several other additions following the same format. Plans are already in the works for 'Talking Toons', with animation bigwigs like Matt Groening, Seth McFarlane and Mike Judge, and 'Acting Funny' with comedic actors like Zach Galifianakis.

The special is helmed by longtime comedy Director John Moffit. His resume includes 'The Ed Sullivan Show', and Richard Pryor, to 'Mr. Show' and the upcoming film version of 'Colin Quinn: Long Story Short' also for HBO. Gervais serves as Producer, and somewhat of a moderator(an aggressive one at that), which may explain his inclusion on the panel.

Now don't get me wrong, I love Ricky Gervais, but he is not known as a stand-up comedian. He's only started doing it the last few years and only does a few giant shows, no clubs. Though I suppose in all fairness the special isn't called 'Talking Stand-Up', it's Talking FUNNY, and there is no doubt that Gervais is that.

Look for 'Talking Funny' sometime in April.
Posted by JediRob at 12:10 AM