Tomorrow I am attending not one, but two advanced screenings of upcoming films that I was looking forward to. Jealous yet??? 
America is a lost nation. When an epidemic of vampirism strikes, humans find themselves on the run from vicious, feral beasts. Cities are tombs and survivors cling together in rural pockets, fearful of nightfall. When his family is slaughtered, young Martin (Gossip Girl's Connor Paolo) is taken under the wing of a grizzled, wayward hunter (In the Cut's Nick Damici) whose new prey are the undead.

Simply known as Mister, the vampire stalker takes Martin on a journey through the locked-down towns of America's heartland, searching for a better place while taking down any bloodsuckers that cross their path. Along the way they recruit fellow travellers, including a nun (Kelly McGillis) who is caught in a crisis of faith when her followers turn into ravenous beasts. This ragtag family unit cautiously moves north, avoiding major thoroughfares that have been seized by The Brethren, a fundamentalist militia headed by Jebedia Loven (Tony award-winning actor Michael Cerveris) that interprets the plague as the Lord's work. 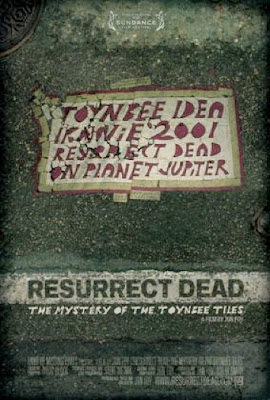 Then at 12 pm its off to see the really intriguing documentary Resurrect Dead: The Mystery of the Toynbee Tiles. This one sounds absolutely sick:


Beginning in the early 1980s, hundreds of tiles carrying this cryptic message were found embedded in the asphalt of city streets as far apart as New York, Philadelphia, St. Louis, Santiago, and Buenos Aires. Street art? A prank? A message from space?

Filmmaker Jon Foy recounts how young artist Justin Duerr became fascinated with the strange plaques and, with two other "Toynbee tile" enthusiasts, Steve Weinik and Colin Smith, spent years trying to discover what they meant and who made them. The unlikely investigators uncovered increasingly bizarre clues: a newspaper article, a David Mamet play, a Jupiter colonization organization, and a Toynbee message that "hijacked" local news broadcasts

That the origins of a street tile can be so captivating is testament to both Duerr's passion and Foy's film making. Artfully constructed, RESURRECT DEAD thrusts us into the black hole of this fantastic mystery but also reflects on Duerr himself, and the personal connection he develops in his attempt to find an answer.

Um, so yeah... pretty fucking awesome!!! Reviews to come.... don't you wish you had a blog to??? Hehehehe...... Big ups to Adam K from Brigade Marketing for making these screenings happen for us. We appreciate it!!!
Posted by Mike D. at 12:07 AM