Here Is Rooney Mara as Lizbeth Salander... What Do You Think?

W magazine has Rooney Mara on the cover in costume as Lizbeth Salander from The Girl With The Dragon Tattoo... and as a fan of the original movie and someone who is reading the books, I must say I like the way it is shaking out! First, here is what Ms. Rooney looks like: 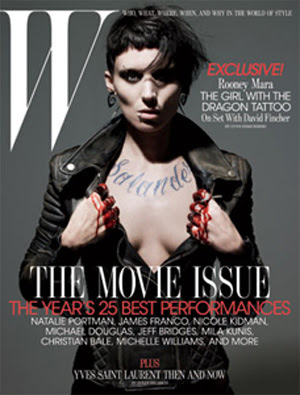 and here is what the wonderful Noomi Rapace looked like in the original 3 Swedish films: 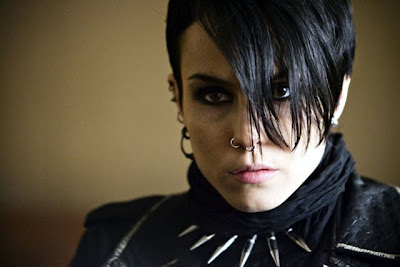 Wow, very different then when we highlighted her a few months back as Obscure Hot Chick of the Day. Looks pretty good to me... and I was a bit worried. But this is in the capable hands of David Fincher, and here is what he had to say to W on why he thinks he was picked to helm this controversial and long awaited Americanized version:

"I have no misconceptions; I know what the game is. They wanted me to do Zodiac because Se7en was successful and both are about serial killers. Now they offer me Girl With the Dragon Tattoo. They think, No one does perv quite like this guy."

That's so true, its scary. I'm officially psyched and a lot less worried about how they were going to tone down the Girl With The Dragon Tattoo for the American audience. Is it me, or does Rooney's version look even more edgy and bad ass? Do you guys like what you see... let us know in the comment section below! We'll see... the film is due out in late 2011/early 2012. Thanks to /Film for the tip.
Posted by Mike D. at 12:08 AM