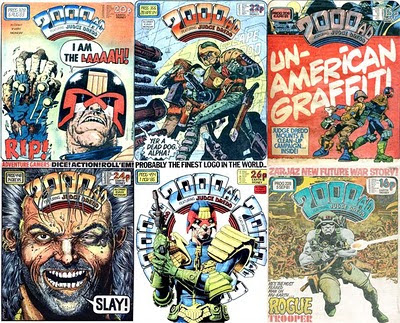 Most of you guys probably never heard of 2000 AD, the semnal British magazine/comic book that is absolutely awesome. Characters like Judge Dredd, Dan Dare, and Slaine had some amazing stories in this legendary magazine. We also got to see the talents of guys like Alan Moore (One of the best comic writers... ever), David Gibbons (Watchmen artist), Garth Ennis (Preacher), Mark Millar (Wanted) & Grant Morrison (Batman) come to fruitition. Not to mention, in my opinion, the greatest comic book writer ever... my personal favorite, Neil Gaiman (Sandman, The Eternals, Marvel 1602). This magazine represents the best of the UK comic book industry, and just by this small list of artists & writers above, I certainly am thankful for our British brothers (especially Gaiman... thank god for Gaiman!). So, here you go... 33 years worth of cover genius. Thanks to io9 for the tip.