Hey kids, its time for another installment of Takin’ it Back... Way, Back with your Deity of all things 80’s, JoeyESQ (that’s me). Which means its time once again to talk about more of the forgotten toy lines of that particular decade. As I discussed last time , I’ve always felt that the 80’s were the “golden age” of boys toys, especially compared today when everything on the Toys R Us shelves is unoriginal, derivative, uninspired and boring. Speaking of which, remember when TRU was set up like a real store, and not some OCD obstacle course? I miss aisle 7C. Anyway, let’s get started...

THE SAGA OF CRYSTAR: Released by Remco in late 1982, Crystar, along with Mantech (which I discussed in the last article) were among the first action figures I can remember owning. I have semi-vivid half memories of Christmas 1982 and being almost 4 years old and getting a bunch of Crystar stuff that year. The entire line consisted of only 7 figures, a few vehicles and a playset. Looking at pictures on the ‘net the only ones I didn’t have were the Crystal Dragon, the Castle and the two Shatterpults (which is a cool fuckin name for a vehicle, I must say). I still have the Lava Dragon in fact, as it ended up in my He-Man box long after the Crystar toys were lost or thrown away. Now that I think about it, that might be the toy I’ve owned longer than any other. 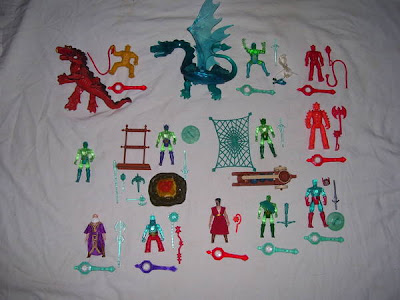 Unfortunately, just like Mantech, Crystar didn’t have a cartoon or movie to support it, and just like Mantech it was crushed by the absolute dominance of Star Wars and He-Man, and there was never a second wave of figures beyond the initial release. Marvel Comics did release a 12 issue mini-series, and from what I read about it, the storyline did seem pretty original. I couldn’t even find anything Crystar related on Youtube (I KNOW there was a commercial because I can still hear it in my head), which definitely speaks to how obscure Crystar really is, because lets face it, EVERYTHING is on Youtube. 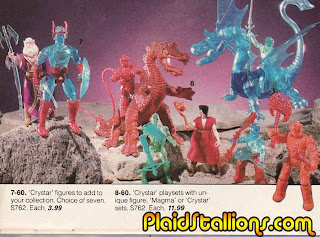 ***Please click "Read more" below to read the rest of Joe Esq's Takin' It Back... Way Back***
SECTAURS: Released by Coleco in 1985, Sectaurs was another “one hit wonder” in the fact that it only had one wave of figures released, but what a wave it was! The figures themselves were 6” tall, which bucked the trend of the 3 and ¾” Star Wars and G.I. Joe toys that dominated at the time. Each figure came with an insect companion, some of the companions were small and had some kind of wind-up feature like walking or a retractable grappling hook or flapping wings. Others were large, however, and looking back, these were some of the coolest and most innovative toys I can remember. The lower body of the larger insects was actually a black velour glove, turning kids into miniature puppeteers, making fingers into legs and also allowing kids to control claws and pincers and stuff.

Sectaurs had a comic book and a 5 part cartoon mini-series. Additionally, I vividly remember Sectaurs having a multiple-part toy commercial with a running storyline in it, which if I recall correctly, would air during the block of Friday night sitcoms that would become TGIF in later years. Oddly enough, I’ve never seen the Sectaurs cartoon (well not before I took a few hour break from writing this article to watch it on youtube – it wasn’t terrible, I gotta say).

It seems like Sectaurs had all the tools to be a successful and long-lasting toyline. So what killed it you might ask? 2 things; price point and aesthetics. First off, at 6” tall, and with those huge insect steeds, Sectaurs toys were expensive in comparison to other figures of the day. You could get four or five G.I. Joe or Star Wars figures for the price of one Sectaurs figure, which in the mind of a parent (especially a cheapskate parent) is probably the most important thing. Secondly, despite being really well-sculpted, even the heroes of the line were kind of horrifying to look at, which apparently was again enough to make parents walk by in favor of other more pleasant looking toys. The lesson here being that parents ruin everything. Sectaurs had a second series planned and photo advertisements even made it to Sears and Consumers catalogs, but the line never hit the shelves, and Sectaurs got relegated to being one of those toys kids had one or two of and just used as some new monsters for He-Man to fight (at least that’s what I did). 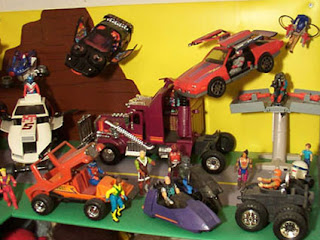 M.A.S.K. (Mobile Armored Strike Kommand): Released by Kenner in 1985, M.A.S.K. was basically a hybrid of G.I. Joe and Transformers. As the popularity of Star Wars was dying off by 1985, Kenner needed a new cash cow, so it did what anyone in a semi-panic would do and ripped off the ideas for its competitors 2 biggest toy lines and mashed them together into a pretty cool concept of its own. The Mobile Armored Strike Kommand was a team of specialists led by Matt Trakker. They piloted vehicles that transformed from normal every day looking cars and stuff into weapons of total destruction. They battled the criminal organization V.E.N.O.M. (Vicious Evil Network Of Mayhem – Kenner sure did like acronyms), led by Myles Mayhem (see how that works?). Mayhem had his own team of villains who also had transforming vehicles. Both teams also wore helmets (masks) that gave them varying special powers and abilities.

M.A.S.K. is something of an anomaly on this list, as it had a 75-episode cartoon that lasted for 3 seasons between 1985 and 1986. The toyline actually had four waves too, and as I’m writing this I’m having second thoughts about including M.A.S.K. as a forgotten 80’s toy. Its nowhere near as obscure as Sectaurs or Crystar, or any of the toys I talked about in the first article, yet it certainly didn’t enjoy the longevity, or the place in pop culture, of a Star Wars or G.I. Joe, or Transformers, or He-Man, or even a Thundercats or Voltron. M.A.S.K. took a weird turn towards the end of its run, which I think contributed to the franchise’s demise. In the 3rd season of the cartoon, and the final waves of the toyline, the series took on a bizarre racing theme. Miles Mayhem’s twin brother showed up and instead of battling V.E.N.O.M.’s oddly undefined criminal enterprises, Matt Trakker was battling the Mayhem brothers on the race circuit. 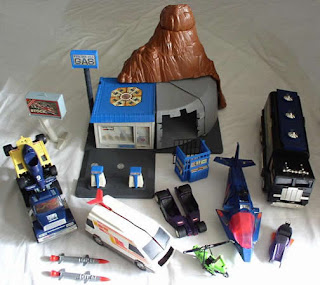 Now I know some internet douche is going to point out that Hasbro just released a Matt Trakker G.I. Joe figure as an homage to the old toy line and therefore, M.A.S.K. hardly qualifies as “forgotten”, but as Mr. Nice Guy said to Sampson Simpson, I stick by my story. It may have been less forgotten than some, but it still vanished for the better part of 25 years or so, and one homage toy aside, no one’s attempted to revive it. Also, “Forgotten” and “Forgotten to geeks” are 2 very different things. Think about it. 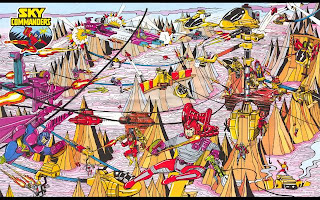 Sky Commanders: Released by Kenner in 1987, Sky Commanders allowed kids to act out the adventures of General Mike Summit and his team of multi-racial soldiers and mountaineering specialists as they battle the evil General Plague and his team of villains, the Raiders (who were slightly less vicious criminals than the football team of the same name). The setting for the series is a new continent in the South Pacific called “The High Frontier” that was basically all mountains, and was the only place on the planet where the powerful new radioactive element Phata-7 could be found. Aside from the fact that the element sounds like a really bad rapper’s name, the whole series had a preachy, semi- environmentalist feel to it that really turned me off, even as an 8 year old. 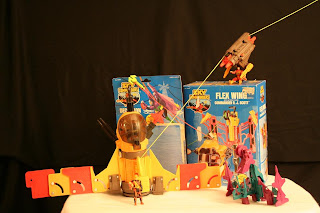 Apparently I wasn’t the only one because the cartoon lasted a whopping 13 episodes. The toys, I must admit, were pretty cool though. The gimmick was that each figure and vehicle came with a series of strings and clamps, which the figures could then slide across. Some of the vehicles were even motorized and would winch their way up and down the strings, allowing a kid to recreate high-tech mountain warfare. The only problem was, in the hands of kid, the stings got tangled, knotted and rendered useless in an average of 15 minutes. I’m sure this contributed to the short life of Sky Commanders, as parents tend not to be too keen on replacing toys that get ruined very quickly, much less add to their kids collections of said toys. 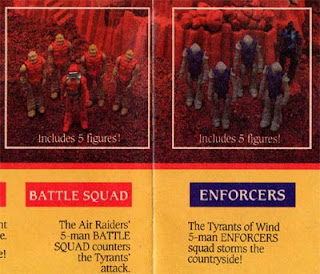 Air Raiders: Released by Hasbro in 1987, Air Raiders was another toy line that, like Sky Commanders was longer on concept than it was on execution. For some reason I liked Air Raiders a whole lot better though. The gimmick with Air Raiders was that each vehicle or playset had an “air powered” feature or features (missiles that fire when you press on an air filled bladder or a motorized fan that made things hover). Basically, the toys themselves were more vehicle-oriented than character-oriented, by which I mean that the main selling point was whatever cool air-powered feature the vehicle had rather than a particular action figure of a character. The pilots of the vehicles were mostly identical, non-descript 2” robot looking things.

Air Raiders never had a cartoon, but it did have a comic book and in that there was a storyline. The action took place on the planet Airlandia, which was overtaken by the evil Aerozar after a giant comet robbed the planet of most of its oxygen supply. He formed an army called the Tyrants of the Wind and sought to ration air and imprison anyone who opposed him. These evil designs were opposed by a group of pilots calling themselves the Air Raiders. Led by Admiral Fury and General Rokk, this group of heroes lived by the motto “Free air for free men!” Air Raiders never had a cartoon to support it, so like every other toy line that wasn’t Star Wars, it failed after one wave of toys. A second one was planned and advertised but never made it past the prototype stage. Still, the vehicle designs were really cool and the storyline was unique enough, I can’t help but think that with a little tweaking, Air Raiders might have stuck around a little longer. 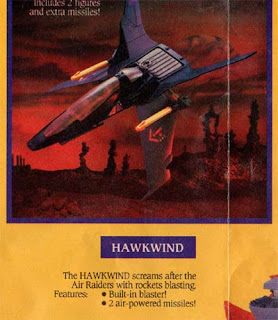 I vividly remember seeing the commercial for Air Raiders (which was tagged at the end with “from the makers of G.I. Joe” which was sure to get any toy-lover’s attention) and right away going “I want those”. I also remember walking into the now long-gone Markette variety store on Crossbay Blvd. sometime in the early 90’s and finding a bunch of Air Raiders toys still sitting on the shelves. You know I bought every one of them.

Anyway that does it for this time, more soon!

JoeyEsq is a lawyer, a guido, and a part time Tyrant of Wind. When he isn’t here at CCD referring to himself in the 3rd person (and by nicknames that NO ONE actually calls him) he can be found attempting humor and complaining a lot on his own blog, Perpetual Dissatisfaction .
Posted by Mike D. at 11:17 AM