So all week long I have been regaling you guys with stories about the 2010 NYC Comic Con, one of our first major events that we were granted press passes to cover. There was so much going on and we tried our best to hit up all the things that interested us. Early on in the day Friday we walked past the Ape Entertainment booth and my heart almost stopped... I was staring at a Black Dynamite comic book!!! 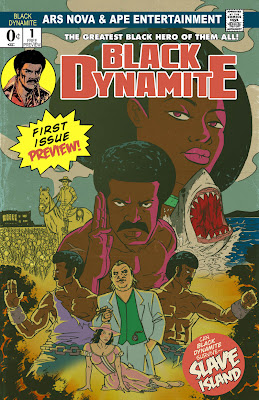 Holy. Fucking. Shit. Now this is something I was really happy to see. If you read this blog, you know of my fascination with Black Dynamite. I freaking love that movie... and then fresh off the announcement that there would be a Black Dynamite Cartoon (we covered that here), we would also get some further adventures of every ones favorite Super Negro... and Surviving Slave Island??? Yup, I'm in. As I began to explain how excited I was to Sam, I realized he was not as enthusiastic as me. Immediately I knew why he wasn't as excited as me: He had not seen the movie. As we broke into a classic "What? You haven't seen it? What..." conversation, a gentleman behind the Ape Entertainment table interrupt us. He said "Hi guys, I'm Brent. If you want to have him watch the movie, why don't you guys stop by our panel tomorrow night. We are showing the whole movie plus 10 minutes of the cartoon." Holy. Fucking. Shit. I wasn't missing this for the world.
The whole next day was spent anticipating the 8pm Black Dynamite panel. Brent told us there would be a special give away and appearance, and I was wondering just who would be there. Would it be Cream Corn, Bullhorn, The Fiendish Dr Wu... or BD himself, Michael Jai White? When we got downstairs, come to find out that it was going to be the creative team speaking at the panel. Director Scott Sanders, musical editor and composer Adrian Young, and soundtrack supervisor Andres Torres of Wax Poetics. Now I was really psyched, cause we were about to get some real behind the scenes info, and I couldn't wait to hear what the guys had to say. Check out our footage of the actual panel here.
Once the panel was over, they went into 10 minutes of the Black Dynamite cartoon footage, which was phenomenal. Very over the top and crazy. Then the film was shown. I thought Sam was actually gonna have a heart attack from laughing so hard. The whole room was buzzing with laughter. After the film, they announced that Scott would be sticking around to sign some limited edition black & white variant covers of the #1 issue of Black Dynamite. Sweet. We waited to the end to ask Scott some questions as only my crazy ass could think of. Check out the video:
Very cool dude... and honest as hell. The fact that he looked up Moon Cricket in the dictionary proves his dedication to the racist comedy awesomeness that is Black Dynamite. Great dude, and he was even gracious enough to inscribe my #1 variant with "I thought I told you honkies in the CIA that Black Dynamite was out the game..." So Fucking Cool!!!
Scott also signed four copies of the #1 variant preview issue for you guys... the CCD readers!!! There were only 500 of these special covers made up, and it was strictly for the NYC Comic Con. All you have to do to win one is add your favorite Black Dynamite quote in the comment section below. The 4 best quotes will get the issues... Thanks to Scott Sanders for making such a great movie and being so cool to a couple of dudes with a small time (but up and coming!!!) blog and thanks to Brent and the whole Ape Entertainment team for the extra books and tickets to the screening. I can't wait till the BD cartoon and comic book come out!!! 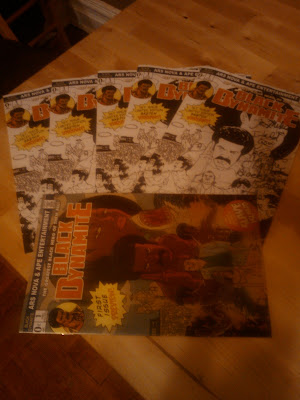