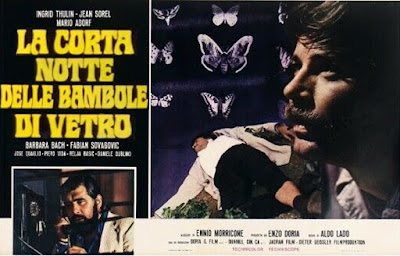 Gialli Dreams in Yellow will be a series of articles, essays and reviews of my favorite horror sub-genre, Giallo. Giallo is the Italian word for YELLOW, but is also used to describe the whole sub-genre of horror films that weave elements of mystery, thriller and horror all into one narrative... sprinkle in over the top violence alongside some gratuitous nudity and you got yourself a GIALLO!  Here are my thoughts on the genre... I hope to infuse some new opinions & views into what I consider the most diverse sub-genre in horror movie history.

Greg Moore, an American journalist visiting Prague with his girlfriend Mira is found dead. However, he's actually only temporarily paralyzed, but the coroner fails to realize this and proceeds to prepare him for the autopsy. While Moore awaits his doom, he tries to recollect what has happened to him. Can he put the pieces together before the autopsy is performed?

This movie surprised me more then you can know. Watching Gialli movies is a certain undertaking... one who has seen as many Gialli as I have goes into the films understanding the things they are about to endure. Black gloved killers, POV shots, random boobs and of course there will be more blood then Daniel Day Lewis can make a milkshake out of!!! But not this one... this is DIFFERENT. 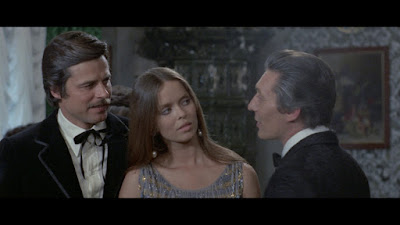 This one teeters on Sci-Fi way more then any Gialli than I could remember. It starts off traditionally enough, but it quickly devolves into a story about a man who seems to have been killed but is not truly dead. An autopsy is scheduled, so the clock is ticking... can he put the pieces together on who "killed" him before the autopsy doctors finish the job?

This is uncharted waters for a Gialli, and a pleasant surprise at that. I like the idea of a change of pace from the traditional black gloved POV murders. As a matter of fact, hardly anyone actually gets murdered in this movie at all! Technically 6 people meet their demise in the film, but only 2 are actually MURDERED on camera, with only one of those being dramatic at all.  Not exactly a Bava/Fulci/Argento or even Martino-esque body count by any means, and it isn't needed in the least bit. This movie thrives on suspense and thrills... it is so tense, flipping perspectives from the corpse on the autopsy table to flashbacks of the days leading up to the moment. You can't relax for a minute because the tense nature of the movie won't let you get comfortable.

It's nice to see some actual intrigue and wonderment drive the plot of the movie... but this is a Gialli, so it does need some visual bite. There are some great moments within the flashbacks scenes that feature beautiful imagery. And the culmination of the film takes place at the headquarters of a secret society that involves an insane room set up with beautiful flowers that create quite a memorable visual. This movie proves that the genre doesn't have to be all hack/slash bloodshed. 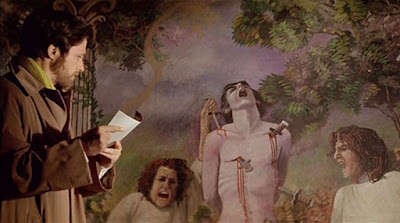 This is the kind of Giallo movie that will appeal to pretty much any genre movie fan. Your Sci-Fi/Medical Mystery itch can be scratched while also hitting many of the traditionally beats Gialli cinema lovers will be expecting. Totally enjoyable throughout with the rare ending that doesn't fall short. One of a kind... in the best way possible!