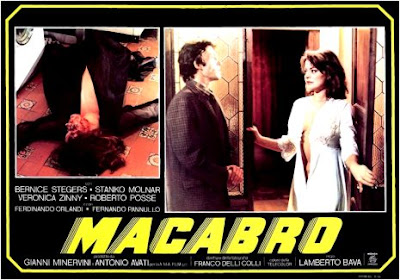 Gialli Dreams in Yellow will be a series of articles, essays and reviews of my favorite horror sub genre, Giallo. Giallo is the Italian word for YELLOW, but is also used to describe the whole sub-genre of horror films that weave elements of mystery, thriller and horror all into one narrative... sprinkle in over the top violence alongside some gratuitous nudity and you got yourself a GIALLO!  Here are my thoughts on the genre... I hope to infuse some new opinions & views into what I consider the most diverse sub-genre in horror movie history.
First up, a dip in the pool for the son of a Gialli legend: Macabre (1980)
Title: Macabre aka Macabro (1980)
Director: Lamberto Bava
Producer/Distributor: Antonio Avati, Gianni Minervini
Starring: Bernice Stegers, Stank Molnar, Veronica Zinny, Roberto Posse, Fernando Pannullo
Synopsis:
A local New Orleans woman leaves her kids to shoot over to rendezvous with her lover at a secret apartment she keeps. Her daughter figures out what is going on and in an act of defiance she murders her little brother while they are unsupervised! While she is off cheating Mom gets the call and rushes home alongside her lover... who is beheaded in a freak car accident!!!! This is only the first 15 min of the movie... you won't believe what happens next!!!
Analysis: 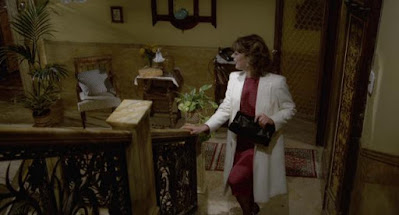 I truly wish that I could downplay the synopsis and say that this movie "settled down" once we got past the very hectic first 15-20 minutes... but that would be impossible. It seems that Lamberto Bava, son of Italian horror icon Mario Bava, seems to have patterned his filmmaking after that of his daddy... as well as other Italian legends Ruggero Deodato and Dario Argento (both of which Lamberto served as assistant director/screenwriter for) that he had worked with. This movie is absolutely batshit crazy from the opening moment when the typical Giallo "dub" voices kick in and these clearly non-Cajun people start talking in a regional 'Nawlins drawl. Wow. Just wow.... 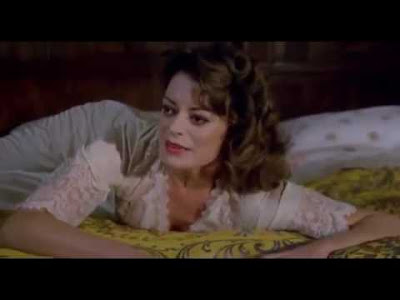 Mommy decides to leave the youngsters unsupervised so she could go on over to her Love Shack for a romantic rendezvous. Because you know.... Giallo. So she arrives at her secret apartment and it happens to be run by a mother and son team that features a young, blind son as caretakers. Perfect spot to lay low... or is it? Her daughter, who is the elder of the two kids, figures out her mom is out living it up. She gives a call over to the sex pad and MOM PICKS UP! You would think this might inspire our super-mom to go home and try to repair her broken home with some 'splainin.... but nope. She is gonna wait it out and have her sex romp one way or another!!! Meanwhile back home the daughter Lucy decides its bath time for her baby bro after she snaps from reality over her impending parents divorce:
The daughter is dressed like a Chucky doll and she acts it all the way out... mind you we are only 10-12 minutes in at this point! I can't actually believe I'm going to say this, but IT ONLY GETS CRAZIER FROM HERE! After the sexy session mommy and boyfriend are notified of little brothers "accident", so of course they rush right over there. A car accident and decapitation later, mommy dearest is left with a broken marriage, a dead son, a murdering daughter and a headless lover! Now we can start the movie... 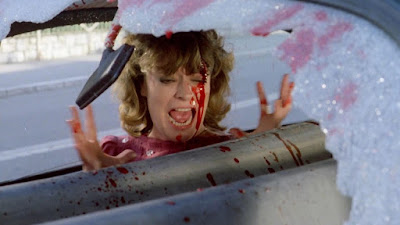 Bava is Italian horror royalty, with a pops held in very high esteem not just in Italy but all around the filmmaking world. So considering his crown prince of horror status, I am not that surprised that he found his way into this industry subgenre. But unlike most royalty, Bava Jr. put in the work to learn his craft. He didn't rely on nepotism and his last name to get his opportunity to direct a feature. He grinded it out as a key behind the scenes member of productions for his dad, Dario Argento, Ruggero Deodato, Joe D'Amato and Ken Clark in a variety of roles. His grandfather had been a camera operator during the silent film era. He soaked all this knowledge and experience up as he waited for the opportunity to be his own boss. And once he was given that special opportunity he never looked back... he is STILL active and working to this day! 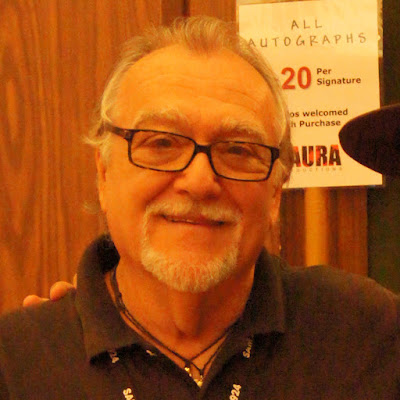 This film is Lamberto's "Reservoir Dogs" in a sense. Not only is it his first film out of the gate, but it is bursting with promise and genius that would be sure to come on future projects. Similar to Tarantino  & Reservoir Dogs (1992), when you watch Macabre it is hard to believe this is a debut directorial effort. The movie looks beautiful, with the interiors and set decoration really driving home the New Orleans location. It also looks is shot beautifully, thanks to veteran cinematographer Franco Delli Colli. But most importantly when it comes time for the "shock and awe" moments we all love in Giallo movies Bava Jr. delivers the goods. The violence and gore is not over the top at all... but when it does pop up it really is used effectively. The deaths in the film stick with you long after they pass because of how well they are relayed through Bava Jr's lens. 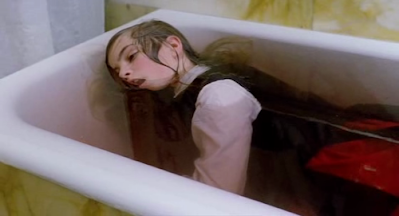 Bernice Stegers smolders on the screen as the worst mom ever. She is sexy in a very overt way, like a plain jane mom with a perverted dark side that she is constantly wanting to explore. Her modest white shoulder pad laden overcoat that is worn early in the movie is replaced by sheer nightgowns with plunging necklines that show off all the goods. She really does transform for the camera when she takes on the role of the cheating wife. People can downplay it all they want, but sex & nudity are a HUGE part of what make Giallo movies so popular. So when you are evaluating these films this must be taken into the equation whether we want to or not. Stegers repressed sexuality is used very effectively by Bava Jr. in developing the storyline. She loves her kids, sure... but she yearns for a life with her younger, sexier boyfriend way more and she isn't gonna let a little thing like him being dead stop her!
Recommendations:
Even though Blade in the Dark (his second film) and Demons 1 & 2 get the most publicity, to me this is the must see Lamberto Bava movie. Fans of Giallo will really dig this take on the story... and it has one of the greatest plot reveals in history!
Posted by Mike D. at 12:07 PM