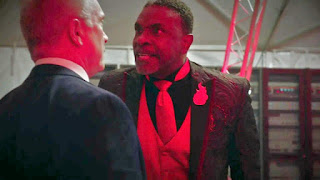 Way back in 1995 we were given Tales From the Hood from two younger directors, Rusty Cundiff & Darin Scott. These guys had made some music videos and movies, Cundiff most widely known for his genius "Fear of a Black Hat" and Scott known mostly for writing/producing. When it came out it was a lot of fun... a good mix of humor and horror, with plenty of social satire mixed in for good measure. I don't exactly know what took so long, but we finally got the long awaited sequel and it does not disappoint!

Clarence Williams III is replaced by the venerable Keith David as the narrator of the film & lead of the wrap around story. The four segments are a bit heavier in social commentary this time around... but done in a way that does not make you feel uncomfortable. There are plenty of laughs, cringes and downright scares to please any type of horror fan out there... and be prepared for some wild out shit right off the rip with the Good Golly segment!

A pretty good streaming option for a quick hour and half on Netflix. Lots of fun....

Email ThisBlogThis!Share to TwitterShare to FacebookShare to Pinterest
Labels: 31 in 31, 31 New Horror Movies in 31 Days, Horror Movies, Keith David, Tales From The Hood 2