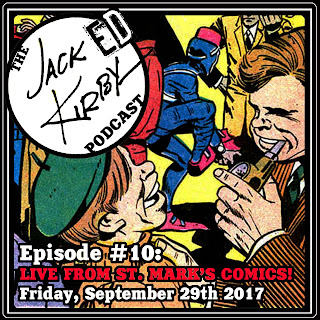 For the last 4 years the gang over at St. Mark's Comics in NYC has invited the CCD Podcast to come down and host a live episode to kick off NY Comic Con Superweek, the week long off site lead up to the big show. This year we decided to make it a JACKED KIRBY podcast instead, so hosts Tommy & Mike D were in the house... and boy did they have some great guests! CCD's own Jedi Rob, owner of St. Marks Comics Mitch Cutler, comic book writer extraordinaire & huge Kirby fanatic Fred Van Lente, proprietor of the Jack Kirby Museum & Research Center Rand Hoppe and comic book historian and Kirby expert Arlen Schumer! It was a fun packed episode... get in there and enjoy it!

Due to some audio issues while recording live, the episode lost a few minutes toward the end. But most of it is intact, so we decided to post away! Thanks to our super producer Rob for the great save... you did a miracle job on it pal!