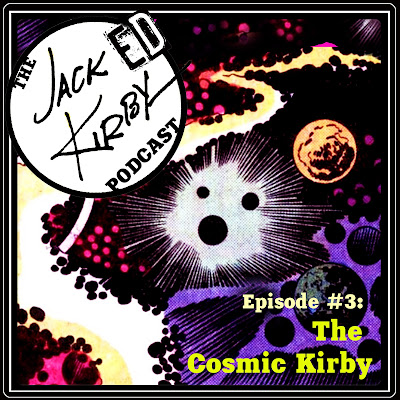 On this weeks episode of the Jacked Kirby Podcast hosts Mike D and Tommy take to the far flung reaches of outer space to discuss THE COSMIC KIRBY!!!! The team is joined on this episode by longtime CCD contributors Al Accettura and Joey Armao as they discuss the many forays of Kirby into Outer Space... from his days on the Challengers of the Unknown, through the FF/Thor years at Marvel all the way through his 4th World Saga at DC!!!!

You can find an embedded player with the episode and show notes after the jump!

(5:01 - 10:15) - The early cosmic years for Kirby - Challengers of the Unknown and Sky Masters are Kirby's first forays into space. Breaking down the team members and how Jack used these projects to launch his cosmic ideas to a general public who were intrigued and scared by the frontiers of space.

(10:16 - 12:30) -  How much was the real life space program influenced by sci-fi and comics? Al reminisces about John F Kennedy Jr's love of comics and how it may have influenced his dad JFK's Nasa policies. Also were the makers of the Rocky Horror Picture Show influenced by Kirby's HIM character when designing Rocky?

(12:31 - 14:05) - Just how amazing were Kirby's visuals when describing/illustrating space? His depictions of the universe, space and of course his signature visual representation of energy Kirby Krackle!

(19:09 - 24:10) - The FF and how it really LAUNCHED (see what I did there?) Kirby into his best space stories. How were these four qualified to go to space???? Galactus choice in pants, The Negative Zone, the teams powers from Cosmic Rays and other key FF related points

( 24:11 - 31:35) - Behold... ASGARD! Jack's Thor run, and how Jack actually used a back up story (Tales of Asgard to really develop the cosmic background of Thor and all its mythology! Plus his famous back up bonus features. Also... photo collages!

(31:36 - 40:55) - Welcome BACK to DC Jack! Editor Carmine Infintino poaches Jack and brings him to DC. he offers him pretty much ANY book he wants... so jack picks Superman's Pal Jimmy Olsen? This is the bridge to the 4th World... New Gods, Mister miracle and the Forever People!

( 40:56 - 47:30 ) - Back to Marvel... and introducing the Eternals! Jack introduces the Eternals, the Celestials and also Jack's Silver Surfer. He also does both the Treasury Edition of 2001: A Space Odyssey and the 2001 ongoing series.... in which we are introduced to Machine Man!

(47:31 - 51:00) - How did Jack disguise the fact that Black Panther, Devil Dinosaur and Kamandi were really outer space/alien books? Even though they don't seem to be...

(55:06 - end) - The wrap up! How were todays biggest artists in comics influenced by Kirby?

Outro Music of the Week: Space Oddity by David Bowie (1969)