Thinking back on all the wrestlers that have come and gone through the years, there are very few that have had the impact that Undertaker has had. Over his 25 year career he has been one of the most dominant forces in the WWF/E and people who root for good guys AND bad guys alike love the big dead bastard. With the 2015 Survivor Series on the horizon (he made his premiere at the 1990 Survivor Series), we decided to enlist some heavy hitters in the wrestling world to celebrate the career of such an icon. Jedi Rob is joined by Steve Resk, founder of the first unpredictable card game The Supershow & wrestler Eric Draven, the definition of Authority & Sexiness in the CCD Nerd Cave and make podcast magic! All hail the Dead Man... 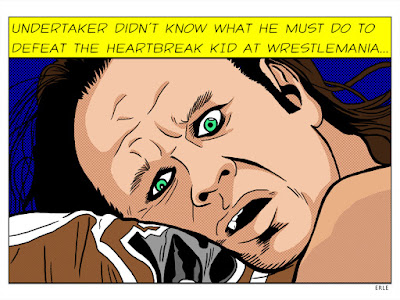 If you want to check out some great Wrestling themed art (including the Undertaker piece above), head over to Erle Tompkins website and order some stuff... tell em CCD sent ya!