If You Like _______, Then You Should Watch _____ is a new column that will be appearing here on CCD.NYC weekly. Whenever people try recommending a movie to someone they instantly go with the line: "It's like ____ meets ____". It is the easiest way to convince someone to watch a new film... appeal to their basic sense of past movies they have seen and might have liked. It usually works too, since people like to compare & contrast things they are going to do with things they have already done. So in order to broaden your horizons and open you to some new films, we will use that model to help you discover some celluloid gold.

Today's Pick: If You Like Suspiria, Then You Should Watch The Bird With The Crystal Plumage


Dario Argento is an Italian filmmaker that has been making films for over 40 years. He has made many types of films, but he is mostly known for his horror contributions. He is also specifically known for making "giallo" films... this is a sub-genre of books & films that originated in Italy. The books & films are usually thrillers that combine traditional criminal elements with some intrigue and occasional supernatural subtext. They are named for the 'giallo' (yellow) color of the labels that were used to denote these types of books in post fascist Italy. While Argento is justifiably well regarded as a Master of Horror, his work in the giallo genre is where he truly does his best work. That is why I am making the case for The Bird With The Crystal Plumage by using the more well known Argento film Suspiria.

Let me start off by saying that I know that Suspiria and The Bird with the Crystal Plumage are two VERY different films, but the common thread that they share is the genius filmmaker that is Argento. Suspiria is widely regarded as Argento's best film and is easily his most known work... even though it was only the 7th film he ever directed. The visuals are insanely beautiful, and the sounds of the film are some of the most iconic in-film music ever. While all of these things are true, this is what makes The Bird With the Crystal Plumage even more amazing. Plumage was Argento's directorial debut. He only had one year of experience in the film making biz, as he was the co-screenwriter on the classic spaghetti western Sergio Leone film 'Once Upon A Time In The West' in 1969/ In 1970 he decided to get behind the camera and direct his own script... and the result is an underrated classic.

When people talk about why they love Suspiria so much they often cite two things: 1) the visuals and 2) the score. When you get the look and the sound of a film so perfect that people are calling you a genius on BOTH accounts you really knocked it out of the park. So it is not so crazy that Suspiria is the first Argento film people want to recommend to anyone they can. Lets take a look at those two aspects of The Bird With the Crystal Plumage and you will see why I think so highly of it.

When it comes to visuals, there are very few films in the HISTORY of cinema that are as revered as Suspiria. Even people who don't like the horror genre would have to give the visuals in Suspiria credit as being beautifully shot. The colors in the film are extremely contrasting, as it constantly goes from rainy/dark to vibrant/colorful from shot to shot. Rooms painted bright red, stain glass windows... you name it and Argento finds a way to accentuate the colors and make them stand out. I am a firm believer in the fact that this is why the film resonates so well with viewers whether they realize it or not. The colors draw you in... especially the blood that appears at key points in the film.

The highlight of this has to be the infamous "hanging" scene, which starts with a switchblade being stabbed directly into a victims heart and ends with her body crashing through a stain glass ceiling where she is then strung up on a noose. The body dangles from the telephone wire, blood smeared on the victim's face and her white nightgown as the bright red walls provide a backdrop. Pretty much a perfect scene. That is probably one of the reasons why the film currently has a 95% rating on Rotten Tomatoes.

The Bird With the Crystal Plumage might not be a visually beautiful as Suspiria, but you certainly see the early markings of the auteur making appearances throughout the film. We see the birth of Argento's "Killer's Eye View" in this film. This is a technique that Argento (and many other directors) use in which the camera doubles for the view from the eyes of the killer. This makes for creepy visuals, and put you in the body of the murderer as they commit their crimes. We also see a pair of black gloves that the killer wears throughout, and the shots of his hands holding different types of murder weapons (a straight razor, knife, club, etc) in anticipation of the deaths to come.

Once again blood is highlighted, but in my opinion it is "how" the blood gets on the screen. This comes in some brutal first person murder scenes. The exterior shots are highlighted in this one as well, with Argento using an awesome selection of scenery to compliment his directorial debut. Though it is very early in his film making career, Argento already had a knack for capturing images in a way that would certainly make viewing one of his films enjoyable.

The second aspect to Argento's films that tend to stick out are the scores. Suspiria has one of the most highly regarded scores in film history, the synth rock masterpiece that comes to us courtesy of Italian band Goblin. Goblin have been frequent collaborators with Argento over the years, starting with the classic Deep Red. But before Argento found his future musical partners, he still was able to "score" a high powered composer to hammer out the music for Plumage (see what I did there? Score... score... eh, forget it!). While working on Once Upon A Time In The West with Sergio Leone, Argento met fellow Italian, legendary film composer Enrico Morricone. Morricone would go on to score HUGE Hollywood films like The Untouchables, State of Grace, Django Unchained, Wolf and The Thing. But first he would team up with Argento for some giallo gold... not only did he do The Bird With the Crystal Plumage, but he also did Cat o' Nine Tales and Four Fly's on Gray Velvet alongside the director.

Out of the three, I prefer Plumage (even though all three are bad ass scores). The music really brings out the frantic crime noir feel of the film, and fits perfect in the 70s time frame that the show takes place in. It is a real throwback, and makes the experience that much better. It is pretty cool when you can see a legend work, but The Bird With the Crystal Plumage provides you with insight on not one but TWO legends (Argento & Morricone) at the dawn of their fruitful careers.

All in all, I have to be honest and say that I personally like Suspiria better than Plumage. I would be lying if I said different. But if I really wanted to put someone on to a solid Argento film that they probably have never heard of, if they already saw Suspiria then The Bird With the Crystal Plumage is where I would go. The films may be quite different in their final forms, but have a lot in common at the root level. You know you want to catch the giallo bug... what are you waiting for? 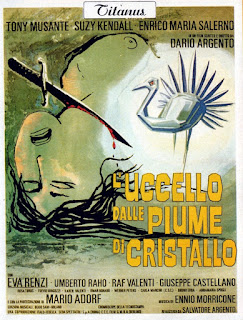 Email ThisBlogThis!Share to TwitterShare to FacebookShare to Pinterest
Labels: Dario Argento, If You Like ____Then You Should Watch ____, Movie Recommendations, Suspiria, The Bird With the Crystal Plumage, Volume 1