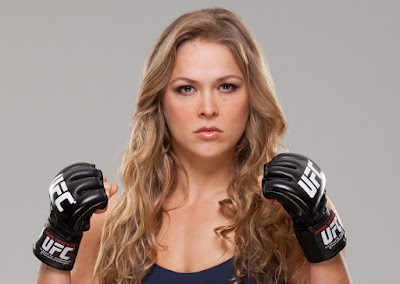 There is something that happens to a person when they become the 'flavor of the week'. No matter why they are getting attention, the offers for movie and TV projects just seem to flood in. All of those promises of riches are hard to resist and can lead to one's downfall when they are no longer 'hot' (I'm looking at YOU, Mr. T.) MMA darling Ronda Rousey is at that place in her hot career. 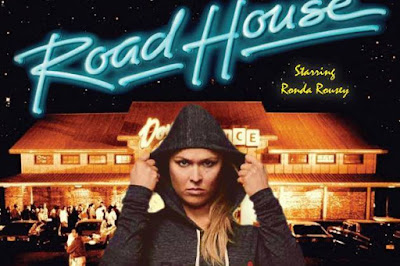 Ronda Rousey made her mark as the first female MMA fighter that you have actually heard of. Her fame comes from taking out her last opponent in only 14 seconds and from having a reputation as being a genuine badass who can walk the talk when it comes to fighting. I doubt few if any of us regular guys could last a full round with her in the ring. In fact, she would punish us extra hard for even daring to face her in the first place.

She is also an attractive girl so a role in a superhero movie was a no-brainer. This art has been circulating the webs for awhile now and there is no denying that she would make a fantastic Captain Marvel by looks alone. The woman in those art pieces is Carol Danvers. Someone powerful enough to battle armies in space. Captain Marvel is one of Marvel Comics' 'Cosmic' superheroes and therefor will be a central player in the whole Infinity War series of films that we are expecting in the future. This is the time to cast someone to play such an important part. The person has to both act and look the part. 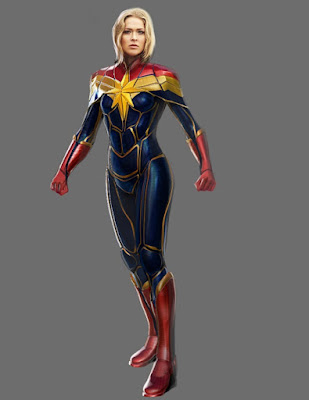 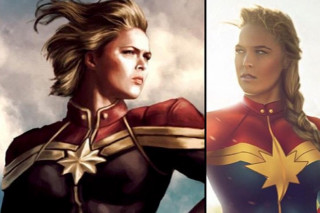 I you wondered just who Captain Marvel is this is from her Wiki page.
Danvers possesses superhuman strength and durability, can fly at roughly six times the speed of sound, retains her Seventh Sense, and discharge explosive blasts of radiant energy, which she fires from her fingertips. She also demonstrates the ability to absorb other forms of energy, such as electricity, to further magnify her strength and energy projection, up to the force of an exploding nuclear weapon. When sufficiently augmented, she can withstand the pressure from a 92-ton weight, and strike with a similar level of force, although Hank Pym theorized that this likely was not her limit. Danvers cannot absorb magical energy without consequence, though she aided Dr. Stephen Strange in the defeat of the mystic menace Sir Warren Traveler. Carol Danvers is also an exceptional espionage agent, pilot, hand-to-hand combatant and marksman. 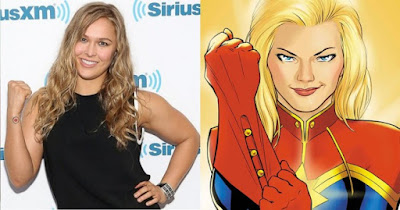 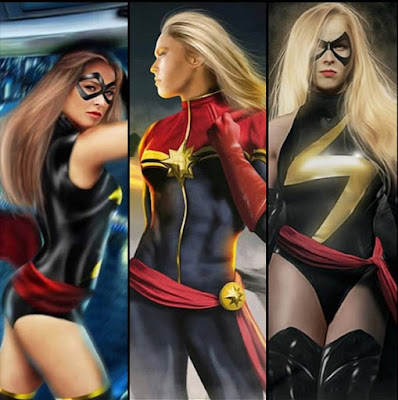 But can she act?

She can schmooze with the best of them and be playful when she needs to be. Personally I would love to see her host SNL. Could be a breakout move for her. She might be a naturally born comedienne.

She must have a sense of humor because I read this week that she is taking the role in a ROAD HOUSE remake where she would play the classic Patrick Swayze part as Dalton 'The Cooler'. The guy who takes to fighting when the patrons at some greasy bayou bar get out of hand. Rhonda would play that part even though she's a GIRL - see what they did there?

We all have seen this movie many times as it seems to play on an endless loop on Cable TV back in the 90s.

Now before you put down this idea lets give this one a second look.

We all remember ROAD HOUSE not only because it's a bad movie. We remember it because it's such a GREAT bad movie. It's one of those Hillbilly revenge fantasies that littered cable television at the dawn of the video age. Every hunky young star worth his salt who could still kick above his head made one. The story was always the same - loner with a past enters small town. Gets a job at bar. Meets cute bar maid who is single mom with cute kid. Town is being menaced by Evil Guy who runs rival bar. He has bikers for buddies and sends them after our hero who beats them down with skills he learned in his 'secret past'. Eventually our hero has to fight one last big guy before the Evil Guy is put down for good and the town in liberated. 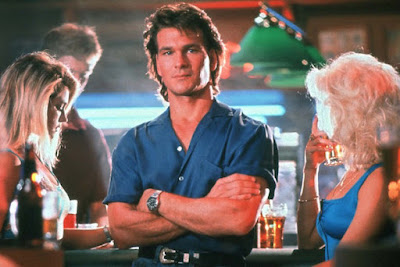 ROAD HOUSE is by no means an Oscar winner, but for this storyline, it's just about as close as this kind of film could get to perfection. It's an audience film that is tremendously satisfying to watch, especially when all the assholes get what is coming to them. Swayze was at his charismatic best and we all forget how good an actor he really was. No stuntman for him either. He came to that picture ready to fight. I wonder how many babies born in 1990 were called Dalton?

Now you substitute a girl in the lead role and the story works just as well. Ronda is a returning war vet who gets a job at a nearby greasy bar as a waitress but after kicking the ass of someone who pinches her butt, she gets noticed by the owner who offers her job as his Cooler. Cue sound...and ACTION.

It's a no-brainer. It's an easy part to act and if she can handle the fight choreography this movie will make ten times the amount it would take to film it. Might even start a whole new genre of female kick ass films. Rousey can't lose by doing this one. Up her profile before she gets that Captain Marvel offer and Marvel locks her into the next decade. 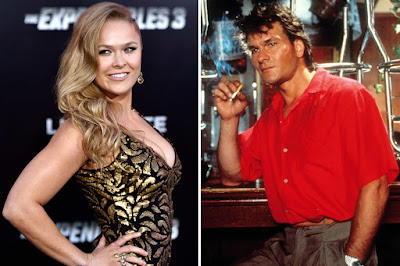 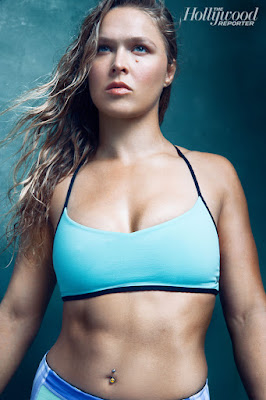 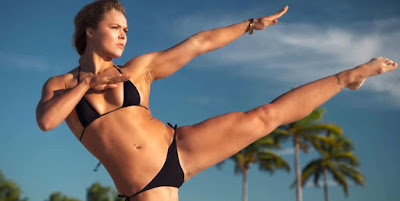