The CCD Podcast: Episode #53 - The Current State of Marvel or "Make Mine Marvel... All Day, Everyday!"

Make Mine Marvel... this was the rallying cry throughout the 70s/80s/90s from the biggest comic company in the game. Before Image shook up the comic world... before DC made a comeback... before all that, Marvel was on top of the world. And then the bad times came. The low book sales. the systematic selling off of the movie rights to their roster of characters. The impending bankruptcy. The leather clad hero outfits of the 90s. It got real bad in ole Marvel-ville. Rock bottom bad. And then... well, and then they got their shit together. They took one of the properties that they still had the rights to, Iron Man (not exactly the biggest tier character) and made a movie, A FANTASTIC MOVIE. This was one of the best comic films ever. And it began... the rebuild. Into the monster franchise money maker that we all know and love. Books sales went up. Making each and every movie work no matter who is in it (and not having their TOP TIER characters back). Being acquired by Disney. Huge... HUGER than everyone could have ever expected. TV shows. Netflix shows. A talking Raccoon and a Tree leading the highest grossing movie of the year. Yup, Marvel is on top of the world. So Jedi Rob & Mike D breakdown the current state of affairs over at the house that Jack Kirby & Stan Lee built. Enjoy our recap on all that has come, and all we have to look forward to... MAKE MINE MARVEL!!!!

Here are a few last minute pics released by Marvel for upcoming character tweaks that will hit the Marvel Comic Universe after Secret Wars runs it course.... interesting, no? 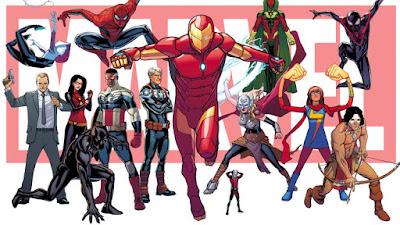 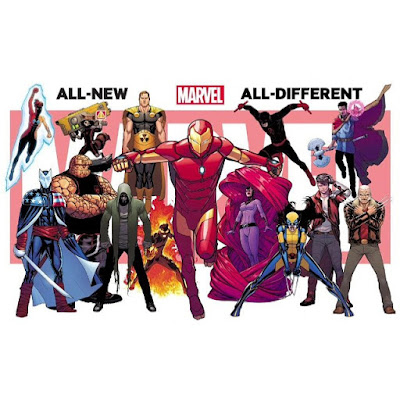