The Hateful Eight: Quentin Tarantino Takes On The Prairie, Stage Coaches, And The Old West...

QT is probably one of my favorite living directors, and his last few efforts (Inglorious Bastards and Django) have done nothing but make those sentiments stronger. In a world where directors are pumping out products, directing TV pilots, and executive producing pretty much everything in the world... Tarantino does a great job of doing what he does best: developing a unique concept, writing a script filled with killer dialouge and putting together one hell of a visual picture. Quentin got a bit mad when a script for his Wagon Train old west adventure picture The Hateful Eight got leaked on line and he abandoned the picture. He said he wasn't going to make it... but just six months or so later the project has gotten new life and it seems like QT is all set for a early 2015 shoot with a Christmas 2015 release (just in time for Oscar consideration BTW). The synopsis is insane, and the first poster looks fabulous. And this cast.. are you kidding me? Bruce Dern, Walter Goggins, Sam Jackson, Mike Madsen, Tim Roth and Kurt Russell... wow. As usual, no real big name women named so far. Just Amber Tambelyn. But knowing QT he will get a career making performance out of her before he makes her a star like he did Uma, Diane Kruger and Kerri Washington before. Check out the official synopsis and full poster after the jump....

The Hateful Eight follows the steadily ratcheting tension that develops after a blizzard diverts a stagecoach from its route, and traps a pitiless and mistrustful group which includes a competing pair of bounty hunters, a renegade Confederate soldier, and a female prisoner in a saloon in the middle of nowhere. 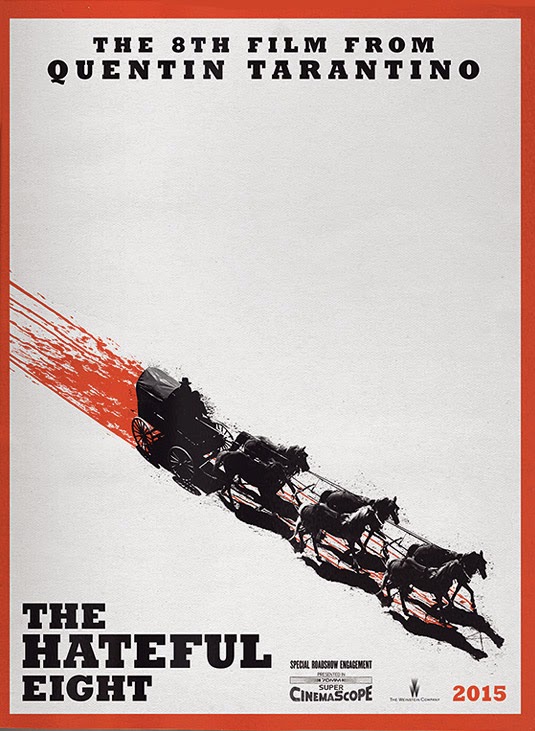