Usagi Yo Jimbo vs Invincible by Ryan Ottley

For those of you who don't know who Ryan Ottley is, he is the kind of guy working in the comic industry that I adore. The reason is because he is a true self made man... dude hated his regualr job, so he began creating his own personal web comics to gain exposure. Instead of submitting samples to the comic companies and hoping they would change his life with a job offer, he published his own stuff and it was seen by the right person... Robert Kirkman, the creator of The Walking Dead, and he loved it! So he offered Ottley a job penciling Invincible... and the rest is pretty much history. Ottley kills on Invincible, and also has drawn variant covers for The Walking Dead and Haunt, which was a collabo between Kirkman and Todd McFarlane. The guy is a great artist, and I really dig his whole path to success. Joe Fletch sent me a cool ass pic he had posted over on his Deviant Art page featuring one of my favorite lesser known characters, Stan Sakai's Usagi Yo Jimbo taking on Invincible himself. The piece is beautiful, but also humorous... it plays up to Yo Jimbo's fearlessness but also the impracticality of attacking Invincible with a sword. Great piece. You can see much more of Ottley's work over at his Tumblr, Deviant Art page, and Blog... and check out the awesome Man vs Rabbit piece after the jump... 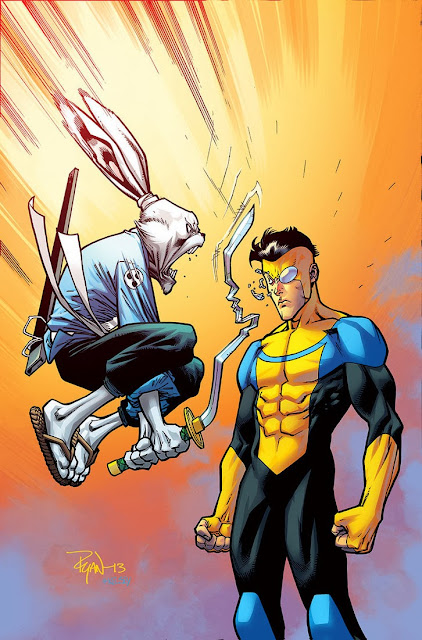