The Legend of Korra - Season Two

The Legend of Korra is an American animated television series that premiered on the Nickelodeon television network in 2012. It was created by Bryan Konietzko and Michael Dant DiMartino as a sequel to their series Avatar: The Last Airbender, which aired on Nickelodeon from 2005 to 2008. Several people involved with creating Avatar, including designer Joaqui Dos Santos and composers Jeremy Zuckerman and Benjamin Wynn, returned to work on The Legend of Korra.

The series is set in a fictional universe where some people can manipulate, or "bend", the elements of water, earth, fire, or air. Only one person, the "Avatar", can bend all four elements, and the Avatar is responsible for maintaining balance in the world. The series follows Avatar Korra as she travels to the metropolis of Republic City to learn airbending and face an anti-bender revolutionary group called the "Equalists."


See more after the jump...

The series, whose style is strongly influenced by Japanese animation, has been a critical and commercial success. It obtained the highest audience total for an animated series in the United States in 2012. The series was praised by reviewers for its high production values and for addressing difficult sociopolitical issues such as social unrest and terrorism. It was initially conceived as a miniseries of 12 episodes, but it is now set to run for 52 episodes separated into four seasons ("books"), each of which tells a separate story. 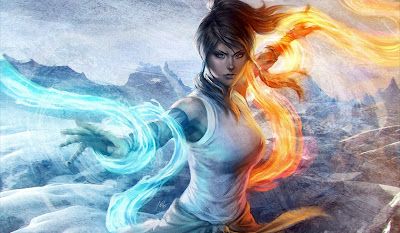 We live in a Golden Age of Television animation my friends. Those who say it's too bad they don't have Saturday morning cartoons anymore don't understand a thing. There is 'Beware the Batman' and Avengers playing on the same weekend. Don't forget Ben 10 or The Legend of Korra which is entering it's second season this fall. 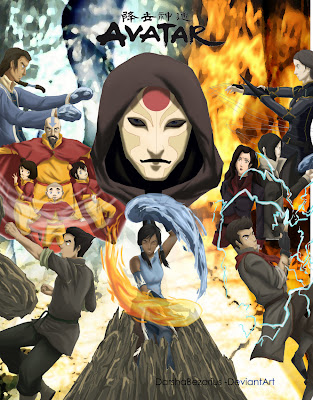 I have a passing association with The Last Airbender and I know all the characters and history and I get the plot. Korra is a fantastic addition to that first series of cartoons set in this particular world. It's a world where certain special individuals can control the one (or all) of the four elements - AIR, WATER, FIRE and ROCK.). It is fun to see the older version of Ang 'The Last Airbender' and meet his children who are more trouble than he ever was.

Most are teens when their powers start to develop and can go either towards good or evil. I like how the show never makes it that simple and teaches that actions have consequences and even if you think your action is right, it may not be and finding the difference is what each character is trying to do. Shows like The Legend of Korra teach the right kind of human values of friendship and trust and most importantly - responsibility - which everyone knows is what comes with great power.

I hope that many of you have seen Season One and what I am telling you is not new but, honestly, tell me you don't want to see what happens next after watching this trailer.