The Hangover 3: Could This Be The Death of The Sequel As We Know It ??? - A Rant By Mike CCD 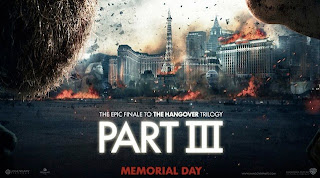 Last night was setting up to be one of the best nights I had planned in a while. It started out with L & B pizza for dinner. Any night that includes L & B is a great night... but it was set up to get even better. Tara and I had tickets to go see The Hangover 3... and we couldn't be more excited! I was a huge fan of the first film in the series and is one of Tara & I's earliest movie memories. We laughed so hard in that film that I almost choked to death... literally. So when the second movie came out last year,  we were there opening night... and were promptly disappointed. We both really didn't like the second film. It was a complete re-hash of the first film in every which way: They got drugged again? The baby replaced by the monkey? Chow in the freezer instead of the trunk? Teddy missing instead of Doug? Paul Giamatti giving the gang deadlines instead of Chow? It was a complete re-do, and not nearly done as well. Now I will say that upon further viewings of  The Hangover II I have come to appreciate it. It is still unoriginal and kinda dumb... but it does have some funny parts. I can watch it and smile. Not nearly as good as the original, but a decent comedy. But The Hangover 3? Pure shit. I have never seen a more unfunny film in my life... especially one that was poised to be so great. So is this the death of the sequel craze as we know it???

Listen, I am a realist. I know Hollywood is not going to stop making sequels. They are cash cows. Instant money on a proven product. The demand is created by the fans who love the original. But they should be saved for action, sci fi & comic book type movies... not comedies and dramas. No fucking reason for it at all. Why you ask? here are a few reasons:

1) Action, Sci Fi & Comic Book movies are telling sweeping , multi-part stories that may require more than one movie to tell. Especially if they are adapting a written work. Think of Star Wars... it is such a life long tale of characters (the prequels take Anakin from 5 year old to adult, the original trilogy take Luke from cornball teen to full fledged Jedi Knight). They couldn't be boxed into a 2.5 hour film. The Marvel films come to mind as well. Think of all the layers of the story that culminated in Avengers. Sequels are necessary to tell the full story. But a comedy? No... no fucking reason. Usually comedies are tied up nicely in a little bow... just like Hangover 1 was. why do we need to see more? What can it add?

2) Shock & surprise are what makes for the best moments of a comedy. so how do you capture magic in a bottle again? You really can't. My favorite moment of the first Hangover is when they first wake up from the blackout. The chicken roaming around the room. Alan falling all over the place. Stew face down on the marble floor. The tiger in the bathroom. The chaos of the room and them having no fucking idea what happened. And then the baby crying out... it was a perfect 4 minutes, and set up the whole fucking movie by saying "how can it have gotten this bad in just one night?". A perfect moment created by Todd Phillips. But when it happened in the second film, it was like "yeah.. really?". Alan's head was shaved, Stew had the face tattoo... it was amped up a notch and a bit darker, but really it was nowhere near as moving as the first scene. It is a played out joke... and has no such effect. Does it do the job and get the movie started? Yeah, sure... but it does nothing to build momentum. So why bother?

3) After a while people just aren't funny when you know their shtick. In the first movie I was blown away by Alan's stupidity and childlike behavior. He was hysterical for me. By the third movie, it becomes stupid. The movie opens with him driving down the freeway with a giraffe in a trailer. It wasn't shocking or funny... just kinda dumb. Leslie Chow was one of the funniest cameo characters ever created in the history of cinema. But by the third film he is a caricature of himself, which was originally an over the top caricature. How many times is Ed Helms going to screech in terror? We get it, your a dentist and easy scared because your the timid one. And how many times is Bradley Cooper going to get hit and scream out "Awww, what the fuck?". He is always getting the physical brunt of the gang's nonsense and always says the same fucking thing. You gotta be a bit more creative in writing dialogue than a simple catch phrase like that, no? And how many times is Doug going to be missing/out of the action? It is just dumb at this point. And could you waste anymore fantastic actors in cameos? Paul Giamatti in the second one and John Goodman in the third are both the exact same character, both of whom are nothing compared to the hysterical Chow of the the first film that they are supposed to be emulating. It is lazy, unoriginal, and a clear cash grab by the studio and the filmmaker/writers/actors. And frankly, it sucks.

I was sitting there as the film opened and I was super excited. The prison break sequence had me on the edge of my seat and I was ready for something hysterical. All I got was a melodrama that provided me with a few chuckles at best. To call this a comedy is an insult to any comedy ever written. It was plain unfunny, wack, and killed any good will that the characters gained in the first two films. It is not even close to the second film... and the second film is a shell of the first film. So how do you even compare the first film to the third one. You can't. I hope Hollywood takes a good hard look at this and realizes that the sequel should be used only in certain circumstances. Comedies should never be one of them. I saw Iron Man 3 last week and I loved it. sequels can be good when done well.  Thanks for fucking up a classic comedy Hollywood.... now lets focus on trying to get more original comedies like the original Hangover made in the future!!!
Posted by Mike D. at 10:31 AM