I woke up on Saturday morning tired from a long night of working at the bar. I got home around 7 am, and fell asleep instantly. I woke up around 1 pm to my phone buzzing incessantly. Who the fuck was blowing me up so much? Turns out it was my close friend Jeff Bond, and he was bearing terrible news. "Is it true? Is Sean Hartter dead?". What? What the fuck... I had just been speaking with Sean the night before. at around 10pm on Friday night. He was sharing a story on Facebook about an interaction he had with a shitty nurse on his last hospital trip, and I was chiming in with some witty comments about what he should have said to her. That was the last time I would interact with the guy. A few hours later the man would pass away from a massive asthma attack. Huh... life is fucked up like that. How could this be it?

Click read more for the rest of my story about Sean

When I started CCD back in 2010 I decided that if I was going to feature any artists's work on the page than I would send them an email letting them know. I dropped Sean a line after I featured some of his work during our first All Horror Week back in October of 2010 . Sean got back to me and we became fast friends. I went on to feature Sean 40 more times here on CCD (this entry is number 42) in addition to the Inception piece. 40 times in 2 and a half years... way more than anyone else. And it wasn't because I was kissing up to someone I knew. I literally have been blown away by Sean's work since I first saw it. It was a no brainer to put his stuff up on CCD...

Over the past few years Sean and I grew even more friendly. He created a faux VHS box cover for a fake movie featuring the CCD family. This was buy far the coolest thing anyone has ever and probably will ever do for me and my humble website. I am forever great full to have been given the "Hartter Treatment". My boy created a piece of art that will live on forever... and now it has too. 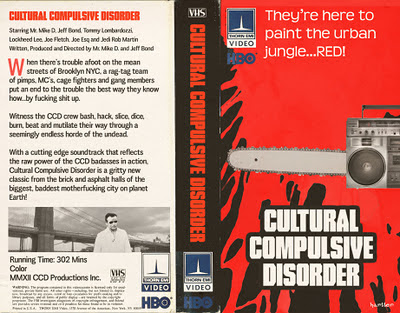 At Christmas time I ordered a bunch of posters from Sean to give to my friends. I tried to order 10 posters, and Sean told me that he would send them... but that he wouldn't accept any money. I told him to fuck off and that if he didn't take my money I would tell his wife on him... and so he reluctantly agreed to accept payment. I bought posters for James West (Rocket Raccoon) Jeff Bond (Trick R Treat), Joe Fletch (Alien), Cal from teh Cave of Cool (Rom: Space Knight), Joey Esq (Sectaurs), Johnny from Freddy In Space (Near Dark), and even two for myself (the CCD VHS and The Omen print he did exclusively for CCD). But the most special poster I bought was for my buddy Tommy Lombardozzi. Tommy was a fellow artists and also became friendly with Sean through CCD. They collaborated on a very cool piece, an image of the Jack Kirby monster Goom. Tommy drew the beast, and Sean colored it. I bought it and hoped to give it to Tommy as a house warming gift after he got his apartment back (it was destroyed in Hurricane Sandy). Now I am just sad because it is the only time these guys will collaborate on something great... 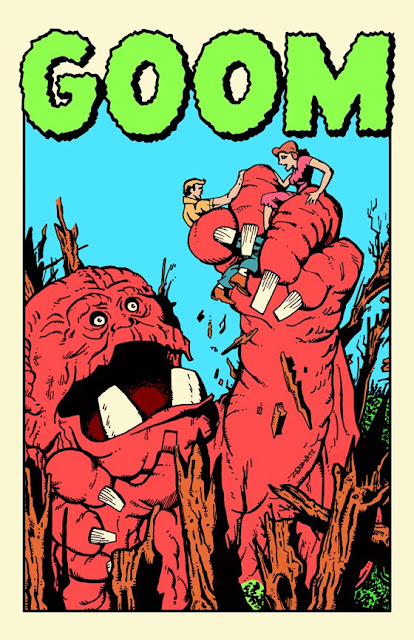 I am so confused by losing this guy named Hartter. We planned on opening a booth together at this years 2013 NY Comic Con on the big floor. We were going all in. I believed in his work, and he believed in us enough to agree to partner up. We were going to do it... big. And Sean was just starting to get the proper due he deserved from mainstream (ie: paying folks) at the time of his death. This really sucks. I was looking so forward to enjoying Sean's company, making some money, and getting his artwork up on the walls of as many people as possible. That is what it is all about....

I will mourn my buddy's passing, and I especially sorry for the loss his wife Allison and his boys Griffin & Gabe have to endure. I have set up a link on the right side of the page just under the header with a link to his donation page, the Sean Hartter Memorial Fund (click here to go directly there and help out), that will help Allison pay for the funeral arrangements. They can use all the help they can get in this trying time. Also, you can click here to buy Sean's work on 360 Walls and stay tuned to CCD to see when they set up a store to buy his awesome prints. Support his family and his memory through the buying of his artwork...

Sean.. I am going to miss you buddy. Tell my big sis Oona I said Hi while your up there. trust me, she will love your crazy ass posters!!!!