Check Out The Battle School Logos From The Upcoming 'Enders Game' Film Adaption!!!!

For a generation of sci-fi readers, Ender's Game is a life defining book. Anyone reading sci-fi in the 80s & 90's probably read the book, written by Orson Scott Card back in 1985. The book takes us to a future where the Earth is facing invasion from a alien species. Due to the long standing war between the two factions, the Earth has created Battle Schools to train the best and brightest teenagers on Planet Earth to be the future military leaders. The story focuses on Ender Wiggins, a youngster who is being scouted to attend Battle School. It focuses on his ups and downs, and just how brutal a school for military training can be for such a young child. The book has been rumored to be adapted to a film for over 20 years on and off, and now we are FINALLY getting the film from director Gavin Hood. Pictures are starting to roll of the set (the above pic features Butterfield and Stanfield), with Asa Butterfield (the star of the excellent Scorsese film Hugo) in the lead role. But yesterday they leaked the Battle School team logos, which is absolutely awesome! I have been waiting for these with baited breath, cause now I will finally get the Salamander t-shirt I have always wanted! I really did the Versace trim as well.These logos, and the four separate schools themselves, are easily identified as inspiration for a group of schools in a certain series about a teenage wizard which shall remain nameless (JK, you biter you!). The movie features a killer cast of young actors (Butterfield, Hallie Stanfield, Abigail Breslin) and older actors (Harrison Ford, Ben Kingsley and Viola Davis), and will be in theaters November 1st to capitalize on the holiday movie season. Check out the four school logos (Rat, Salamander, Asp and Dragon) after the jump...

Here is the movie synopsis:

In the near future, a hostile alien race (called the Formics) have attacked Earth. If not for the legendary heroics of International Fleet Commander, Mazer Rackham (Ben Kingsley), all would have been lost. In preparation for the next attack, the highly esteemed Colonel Graff (Harrison Ford) and the International Military are training only the best young children to find the future Mazer. Ender Wiggin (Asa Butterfield), a shy, but strategically brilliant boy is pulled out of his school to join the elite.
Arriving at Battle School, Ender quickly and easily masters increasingly difficult war games, distinguishing himself and winning respect amongst his peers. Ender is soon ordained by Graff as the military’s next great hope, resulting in his promotion to Command School. Once there, he’s trained by Mazer Rackham, himself, to lead his fellow soldiers into an epic battle that will determine the future of Earth and save the human race.

And here are the Battle School logos: 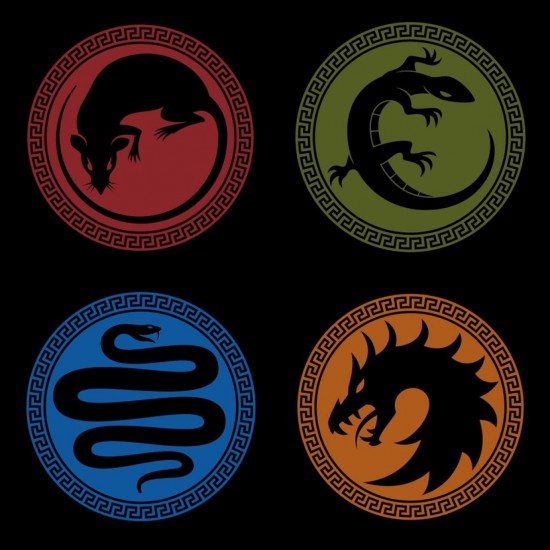