Rick & The Gang Are About To Get Governed!!! Season 3 Of The Walking Dead Is Back From Winter Break...

As we ease back into the regular TV programming schedule there are certain shows which stick out as high points among those returning from winter hiatus. Arrow is one I am really looking forward too. Once Upon A Time as well. And it is going to be nice to finish Supernatural as a series once this season finishes up the series. But one show I can't wait to get finished has to be The Walking Dead over at AMC. Rick and the gang rescued Glenn and Maggie from the grips of the Governor, delivered Daryl into the sadistic hands of his brother Merle, and has seen the Governor condemn Merle & Daryl as traitors pitted against each other in a fight to the death. We also are left with the appearance of Tyrese (one of my favorite characters in the comics), but left me a bit weary because it is clear that his story on the TV show is going to be quite different then the path he took in the comics. So where do we go from here? Well, here are three preview videos to help lay out the plot for the next set of episodes in the very popular zombie drama. Enjoy the video after the jump...

And here is the full size Season 3, Part 2 Poster: 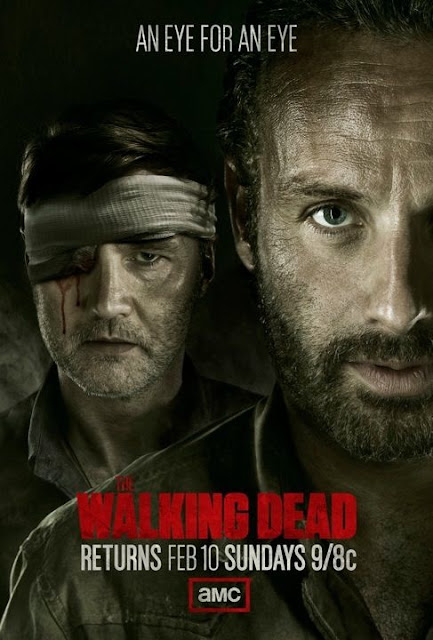