Lucky number 13... nice! here is the 13th edition of CCD Links It Up, where we share a bunch of stories that are making their way around the web but I don't feel could be made into stories here on CCD any better than how they appeared already. So I just share a few lines and the link and allow you to peruse some of the cooler sites that exist out there. This week we got an unbelievable Lindsey Lohan story, some really cool Indiana Jones themed maps, this years Oscar nominees and snubs, some boobies, and a few different opinions on the newest entry into The Texas Chainsaw Massacre franchise, TCM 3D. Tons of great stuff waiting for you on the other side... lets go!!!

1) So the gang over at The Superficial have came across a report from NY Times writer Stephen Rodrick that chronicles Lindsay Lohan while she was on the set of her current movie 'The Canyons'. This film interest me a great deal, and not just because Lohan is a complete train wreck at life and is bound to imploded no matter what she does. The film was written by Brett Easton Ellis (one of my favorite authors), is directed by film luminary Paul Schrader (writer of Taxi Driver & Raging Bull, director of American Gigolo) and co stars James Deen (a male on male porn star). There is supposed to be lots of nudity, explicit sex scenes and crazy dialouge.. and apparently lindsey was a handful to everyone on the project from the casting stage on. You have to read this story if you enjoy others misery as much as I do!!!!

2) I am no fan of Philly (fuck the Eagles!) but artist Andrew Degraff has started a really cool project that turns the Indiana Jones trilogy into map form. That may sound weird, but once you check out how cool they turned out you will see why I enjoyed them so much!

3) Indiewire has a pretty cool list of all the Oscar nominees and perceived snubs. This was a great article for two reasons: 1) it came out minutes after the Oscar nominees were announced and 2) it makes really good pooints as to why the snubs got snubbed. A lot better than just sour grapes and complaining. If you nominate 5, whoever is 6th will complain. if you nominate 10, #11 will bitch and moan, So is the nature of rewarding something...

4) The Chive is back doing Gods work, this time with a gallery of 30 hot chicks in short shorts. While most of these hotties are non famous regular sexpots, a few celebs were mixed in here. Take Hayden Panitierre and her pet camel toe. Oh, and #29, are you kidding me!!!!! Thank you very much Chive... Keep Calm and Chive On!!!!! 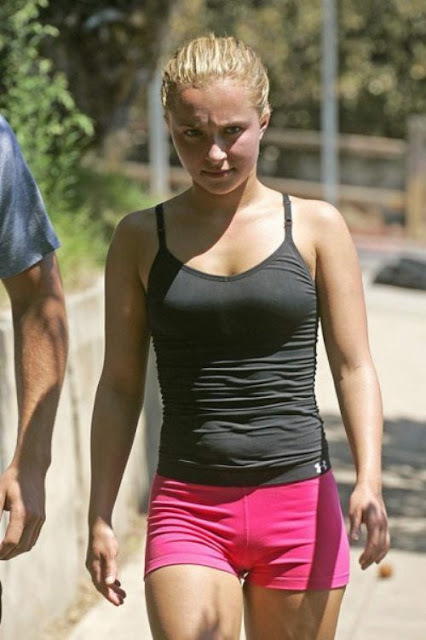 5) Here are what I am guessing are two very differing opinions on the newest film in The Texas Chainsaw Massacre film series, Texas Chainsaw Masscre 3D, from two highly regarded (By who? By at least me of course!) members of the horror community Johnny from Freddy In Space and artist Alex Pardee. Johnny runs one of the finest horror blogs on the planet over at Freddy In Space and he seemed to really like the film. On the other hand Alex is one of the foremost artists in pop culture right now and a self professed horror film maniac, and he absolutely seemed to despise the film. I can only say that I skimmed both articles because I haven't seen the movie yet and didn't really want to spoil it for myself, but it is interesting how the film seems to be so polarizing. The original Texas Chainsaw Massacre is my all time favorite horror film and one of my earliest horror memories, so I hope I side with Johnny on this one...