Kevin Smith & Walt Flannigan To Take On The Bat One More Time... Yes!!!

Kevin Smith dabbles in comic book writing from time to time, and when he does it the results are usually fantastic. His runs on Daredevil, Green Arrow and the Green Hornet are the stuff of legend. But when DC gave him the opportunity to  write a Batman mini series with his longtime friend and co-worker Walt Flannigan... well, I just thought it was amazing. Batman: Cacophony & Batman: The Widening Gyre were two excellent entries into the Batman mythos and introduced us to a killer new villain in Onomatopoeia. The action in the books jumps off the pages, the drawings by Flannigan are perfect, and that signature Smith dialogue is there... which made these some of my favorite Batman stories ever told. So now Smith has taken to Facebook to announce that he is reuniting with Flannigan to wrap up the whole storyline in Batman: Bellicosity. I for one can't wait to see how this story wraps up. Check out the full text that Smith posted on Facebook and check out the first image, a splashpage featuring Bats & Onomatopoeia after the jump.

Batman: Bellicosity will be released some time near summer of 2013...

Here is the press release:

from ish 1 of the forthcoming conclusion to our New York Times Best-Selling Batman cycle!A few years back, DC Comics made my dream come true when they let me do a BATMAN comic book

It started with BATMAN: CACOPHONY...

It continued with BATMAN: THE WIDENING GYRE...


And in 2013, the blood will run in the final chapter of the battle between Batman and Onomatopoeia ...

And here is the splash page; 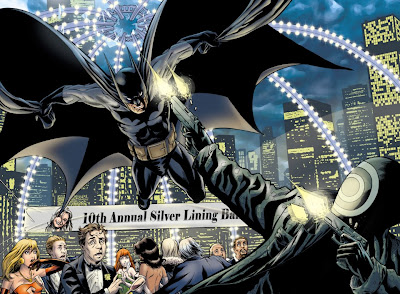