Tarantino XX- Yup, I Will Be The First Person Online For This One...

I have never met a bigger fan of Quentin Tarantino then myself. That is not just me waxing poetically... I really feel like their is nobody THAT I KNOW who likes all of his work as much as me. I remember seeing Reservoir Dogs back in 1994 on a borrowed VHS after Pulp Fiction blew up. A friend lent it to me... and he promptly never got it back. I watch the two of those movies more times between 1994-2000 than anything else. I loved the dialogue, the violence, and the overall craziness of a Tarantino movie... there is nothing better. Tarantino's 20 years in the film game run parallel with the success of Harvey Weinstein's Miramax films, so it's only fitting that Miramax is teaming with Lionsgate to give us the ultimate Tarantino box set, Tarantino XX. You get Blu Rays of Reservoir Dogs, Pulp Fiction, Kill Bill 1 & 2, Jackie Brown, Death Proof, Inglourious Basterds (all of the films he has directed) as well as True Romance, a film that Tarantino wrote. The box set is due out November 20th and has a retail price of 119.00 bucks, but it can be pre-ordered on Amazon.com for 83.99 right now (click here). Check after the jump for all the gory details about the 10 disc set, it is full of goodies for Tarantino fans like myself. I for one have already reserved mine. Get yours now....

Here is a big picture version of the package contents, with the specially designed cover and disc art done by Mondo (how fucking cool is that!!!) 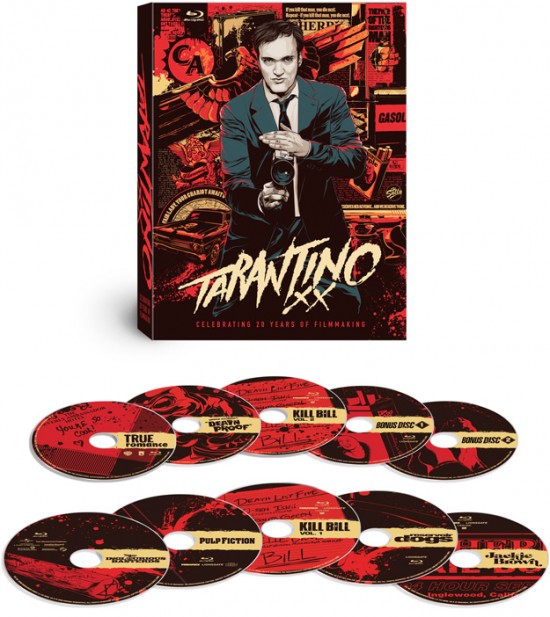 Here is the press release: