The Official Handbook of the Marvel Universe Gets An Update....

One of the greatest memories of my comic reading childhood come from thumbing copies of DC Comic's Who's Who & Marvel's Official Handbook of the Marvel Universe. These two series existed to drain cash from comic collectors like me, as all they did was act as an encyclopedia of all the characters (both minor & major) of the respective universes. It was great to read profiles about big name characters and find out little known facts about lesser known characters, and the best part was that they often listed the first appearance of the character. This was an important detail for collectors like me, as I often wanted to acquire a characters first appearance. It was like the Encyclopedia Britannica for geeks., just freaking wonderful. Now I stumbled upon a very cool NEW website from the guy who runs Cornered entitled The Official Handbook of the Marvel Universe Reduxe Edition . On this site Calamity Jon is recruiting artists to submit their best recreations of an entry in the Marvel Handbook page by page until they have the whole thing redesigned. This is such a great idea, and so far there are 8 submissions. with many more to come. If you know any artists who you think would be great for this project, click here for the submission guidelines. You can see my 3 faves after the jump... 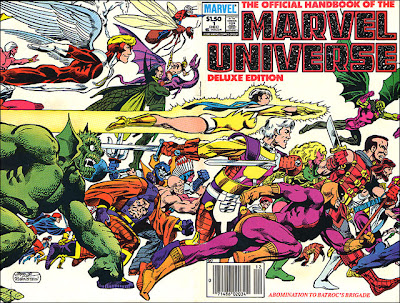