I have been on a bit of a Lego kick lately, probably because I have not been getting my usual "Lego Iconic" fix from Mr. Jeff Bond (get back to work brother!!!!). I came across this wonderful stop motion video called "Lego Arcade" and its sequel 'Lego Arcade 2' over at Topless Robot on one of their countdowns, and I was thoroughly impressed with both of them. Michael Hickox recreates some 80s arcade classics such as Pacman, Tron, Galga, Dig Dug, Centipede, Space Invaders and quite a few other by using Lego pieces and filming them making the moves of the respective games. Pretty great stuff that brings back a lot of memories of my local arcade, The Bow Wow in Howard Beach, NY. My favorite part of the videos has to be the sound effects... so perfect! You can catch both videos after the jump... 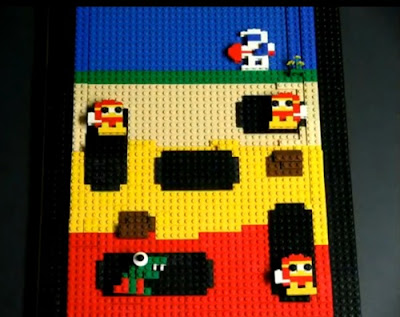