When I was growing up I often sought out forms of rarer forms of familiar entertainment that was offered. While most kids were content watching Freddy & Jason American horror movies, I was familiarizing myself with the Hammer catalouge of horror movies from England. When kids were playing Dungeons & Dragons, I purchased and had my friends playing the Teenage Mutant Ninja Turtle role playing game. And when it came to comics, my favorites were all over the map. Following the lead of some of the older kids at my local comic shop I began reading 2000 AD, and the main storyline in the British mag is Judge Dredd. What a great book... from the first time I read the stories of Mega City, I was hooked. Rampant crime, drugs, and violence engulf Mega City, and it is up to the Judges of the Hall of Justice to keep it all together. Judge Dredd is the best of the best, and he kicks some major ass. We got a pretty campy movie in 1995 from Sylvester Stallone, and while that movie was campy and fun it was very hard to buy Rocky as JD. But now we are getting a second chance at a film reality, with the new Dredd 3D that stars Karl Urban. Urban seems to have gotten the mannerisms and tone of the character down, and the film looks pretty action packed so far. Throw in the sexy ass Olivia Thirlby, and I am in. There is no firm release date yet, but one should be coming soon. You can check out the exclusive first trailer of the film after the jump. 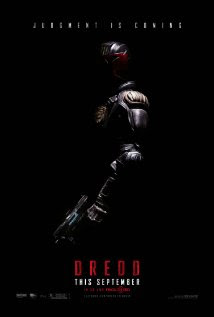