Legos have been around forever (since 1949), but for the most part they were pretty uniform for the majority of those 60 years. Regular square & rectangle pieces of different sizes made up the majority of the sets, and you were left to try and make magic happens with some very basic shaped pieces. But as my boy Cal over at the Cave of Cool & CCD's resident Lego enthusiast Jeff Bond have pointed out on many occasions, these are not your Daddy's Legos. They have been stepping it up with crazy shaped pieces, play sets, collaborations with popular comic & movie properties, and Lego figures that have allowed the possibilities of creations to become endless. It is like Lego is saying "Haha... fuck all you old people" and rewarding the youngsters with more & more cool shit. Case in point: Lego plans on releasing a Haunted House. And not just any Haunted House... a classic Universal Studios type Haunted House, with things like a gramophone, a fireplace with a ship in a bottle, a desk for Dracula to write letters, and a FUCKING ZOMBIE CHEF!!!! Are you kidding me??? Check out this video and watch in awe at what Legos have become... well played, Legos, well played!!!! 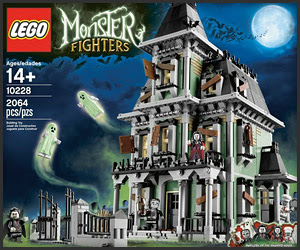