'Thale' - The Next Sick Ass European Horror Movie I Can't Wait To Watch!!!!

European horror movies have been kicking their American counterparts asses for quite sometime. Over the past few years some of my favorite horror movies have come from the European market. Dead Snow, Martyrs, Troll Hunter, The Last Circus, & Rare Imports... these are some of my favorite films over the past few years. Now a small Norwegian film by the name of 'Thale' is slowly building momentum after being screened at this years SXSW film festival and I am becoming very intrigued. The trailer is filled with some of my favorite things: Bloody crime scene, unlikely heroes, dingy basements, shiny guns, random scary guys, and a sexy woodland creature from Norwegian mythology known as a Huldra, aka a sexy naked bitch with a cow tail (played by the lovely Silje Reinamo)! Yup... I'm in! Check out the trailer after the jump and share your thoughts in the comment section below... 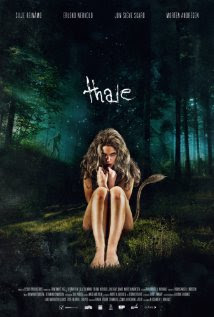