5 Reasons Why Battleship Was NOT That Bad Of A Movie: A Rant by Mike D

So last night Jeff Bond & I had a man date and caught a double feature at the movie theater, watching Battleship & The Dictator. Now I must preface this by saying that I wanted to see Battleship because I THOUGHT my good friend Glenn G had given it a high praise on Facebook after attending a special screening of the film at The Ziegfeld Theater in NYC.  Glenn wrote "This film is not as bad as people say... ITS MUCH WORSE!!!", but I thought he was giving it a compliment since I only read it quick. So on this mistake I decided to check it out... and even though Glenn (and the rest of the known world) seem to have hated it, I actually thought it was a decent pop corn action flick. I don't understand why it needed to be called "Battleship", in the sense that it was a cool alien invasion flick in the vein of Independence Day. Why tie it to a board game??? But I will get to all of that after the jump. Click read more below to see my 5 reasons why Battleship really isn't that bad.... 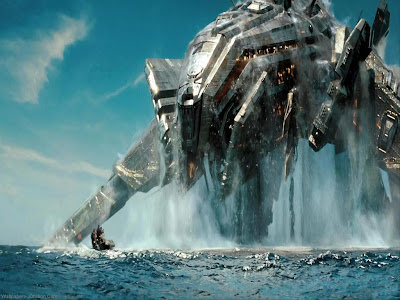 Reason #1: The story is quite original and not half bad:


Listen, I am not saying this one is going to win the Academy Award for best original screen play. It is not revolutionary in any way. But it is not that far fetched of an idea. Scientists develop a communication device that can reach a newly discovered planet and send a signal out to try and reach intelligent life. The aliens receive the signal, and send back a small force of ships to see what Earth is all about. The base of the communication center on earth is in Hawaii, so when the aliens follow the signal back to Earth they are headed straight there. It just so happens that Hawaii is the location of the US Navy's Pacific Fleet (Pearl Harbor) and there is a naval competition going on featuring 14 nations from around the world. This puts the newly arrived aliens on a collision course with the worlds Naval forces... not really all that bad of an idea considering some of the shit I have seen concerning aliens. I love me some ID4, E.T. and Close Encounters of the 3rd Kind, but this plot doesn't seem so bad to me. And truth be told, it is not so bad. The story is hardly the problem with this one. I thought it worked out quite well.

Reason #2: This is a pretty solid cast:

I will address the most glaring point head on. Rhianna is terrible. I will give that to any critic of the cast in this flick. To see little Miss Umbrella running around as a Naval weapons expert is just too much for me. But other than her, the cast is pretty great. Alexander Skarsgard is good a a naval commander in his short time on screen, Liam Neeson is really good as the Admiral of the US Fleet. Brooklyn Decker is good eye candy, and she is  cast a a physical therapist. That means alot... usually we have to suspend belief that some super model is a nuclear scientist or some shit. But a physical therapist... yeah that is kinda believable.

The rest of the supporting naval cast is pretty good, especially John Tui  (Beast), who stole all the scenes he was in. And then we have the lead: Taylor Kitsch. This kid has no luck. He has been cast in three really big budget movies that COULD have propelled him to super stardom (Wolverine: Origins, John Carter, and Battleship) and NONE of them have been received favorably. This is a shame, since Kitsch is good in all of them and has proven that he has acting chops on the Friday Night Lights TV show. I thought the cast worked well....everyone except Rhianna. She was awful. Reason #3: The aliens are fucking cool:


Wow. Wow. Peter Berg may be accused of a lot of things with this film, but one thing that shouldn't be said is that the aliens and their ships aren't fucking cool. They look cool, they attack cool, and they are fucking cool. The ships look awesome, and when they are interacting with the naval ships there is something that Berg does very well. While he makes the alien ships superior to the naval boats, he doesn't make them completely invulnerable and unable to be harmed. Same with the mech-suited aliens.This movie may have had a 200 million dollar budget, but you can see where a lot of that me money went. The effects are wonderful, and whenever a movie like this gets bad reviews I immediately assume that the effects look shoddy and the aliens look like shit. That is not the case here. Plus, the aliens are flawed. They are not all powerful. They can be hurt, they can be beat. The Navy just has to figure out HOW to do these things. Which brings me to my next point... 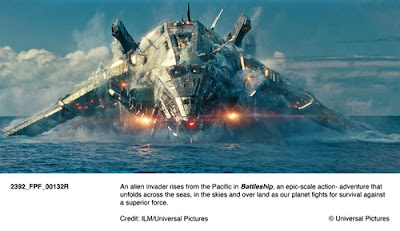 Reason #4: The battles are not so unbelievable:

What is so bad with that? It doesn't fall to one miracle "Hail Mary" like Luke destroying the impenetrable Death Star with one strategically placed bomb in the ONLY weak spot on a planet sized spaceship.That is far fetched. Throughout this whole movie the Navy continually adapting their battle plan to figure out how to beat the aliens is not that hard for me to believe. So when the aliens eventually succumb to their human counterparts, it is not so hard to believe. Now don't get me wrong, there are so many far fetched elements to the aforementioned battles. One can't just drop an anchor on a mega ton war ship and not rip the hull in half, yet that happens in this movie. I am not saying everything that happens is perfectly explainable. Not many sci fi movies are so factual, even the great ones. It involves you suspending your traditional beliefs for a couple of hours why you take in the scenario in the movie. This is an alien invasion film for Christsakes. If you want believable or scientifically factual, go watch a fucking documentary . If you want a fun sci fi popcorn flick, this one could be for you

Reason #5: They reference Battleship the game without making it stupid:

When I first read that this film was getting made, I immediately thought that somewhere near the end of the flick someone would stand up and say "You sunk my Battleship!!!" in reference to the famous quote from the game. That would have been terrible. And thankfully, it didn't happen. But if the movie is based on the board game, you know there had to be some references to it in the movie. But Berg does a great job of working these nods in. First off, he includes many of the famous ships from the game in the fleet of the movie. We have aircraft carriers, destroyers, smaller boats, and the all important Battleship present.This is done fairly easy because the Navy uses all of these ships. When the Navy is trying to track the aliens without radar, we get a really cool scenario where there is a huge grid on the wall of the ship and they are tracking the alien ships using weather buoys that are gridded by coordinates.  They then try and score a "hit" using the grid to predict where the enemy is. This is pretty cool and done very well, and provides a good homage to the game. Finally, the coolest nod to the game has to be the artillery that the aliens use. Their cannons shoot out these canisters that resemble the old pegs from the game. When they hit their target, they stick into the ship and then explode, similar to the way you used to stick a peg in a ship that received a hit in the game. Again, a subtle nod that is done REALLY well. None of these tings make me understand why it was important to tie the movie into the game... all of them could have appeared in a movie that was not a tie in. But they are cool ways Berg fulfilled his commitment to making a Battleship movie. 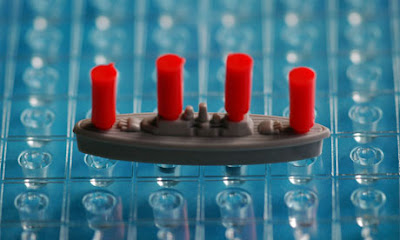 Overall, I am not saying that Battleship was some great fucking movie. Not by a longshot. But it was fun, and full of action. And the aliens looked cool. That is what a summer action movie is all about, no? I had a good time, and it was goofy fun in the same way Independence Day, Battle: Los Angeles and Men in Black were. They are fun movies with questionable plots, but they are pretty good to me. So go see it... or don't. But don't let negative reviews or preconceived ideas be the reason why you don't. There are far worse things in the theater you could be watching....
Posted by Mike D. at 12:29 PM