Hehehehe... I know that the title of my upcoming rant ALONE is enough to make nerds everywhere spill their Red Bull all over their wireless keyboards as they gasp in horror. Plus, I think I just heard Jeff Bond drop dead of a heart attack at his job, and possibly an earthquake from the explosion of anger from Kristen Grillo out on the West Coast!!! But before I get into my latest rant, let me preface this by saying something right off the bat:


I, Michael DeVito, am not a Bay apologist and could give a fuck less what he does as a professional.

I am simply writing this rant because while most internet Fan boys & self proclaimed 'GEEKS' who should be more intelligent than they appear to be need to shut the fuck up. Stop blaming Michael Bay for all the problems that happen in the adaptions he is a part of. Transformers may not be your cup of tea, but it certainly wasn't made by Bay himself. Now there is this flap about what Bay said about the new TMNT movie that will contain Turtles that are of an "alien" origin. Hey gang, I got news for you: If this is true, it PROBABLY WASN'T BAY'S IDEA IN THE FIRST PLACE , NOR IS IT HIS IDEA ALONE!!!! What the fuck is wrong with you people?

Click after the jump for the rest of this rant... 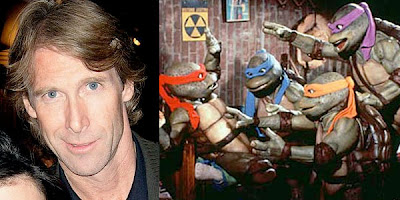 This is a multi million dollar movie production based on a BILLION dollar comic/cartoon/toy/movie line. How the fuck can you blame any choices in the film solely on Michael Bay. You need a few arguments to see why Michael Bay shouldn't be blamed for all this shit? Here ya go...

First of all, he is a producer on the movie. Kind of like the overseerer. He in fact has little to do with the direction of the script and the performance of the actors. None actually. That kind of stuff falls on the screenwriters, the casting directors, and the directors. Not the fucking producer. Just cause he is the one who mentioned it doesn't mean it's his wish. He is after all only the producer, right? The reason why I say this is because people often malign Bay for his interpretation of The Transformers (on which he was the director), yet give Steven Spielberg a pass on his involvement in The Transformers because he was just the producer. How come Spielberg gets the pass, but now when Bay is in the role of producer it is his fault? The producer does have influence on picking the director, screenwriter, and the cast... so one may want to blame Bay for picking a gang that would fuck with the Turtles origin. But to blame HIM as the guy who is tinkering with the story while the people who ARE ACTUALLY fucking with said origin get a pass just seems a bit silly. If Spielberg gets no blame for Transformers, stay consistent when Bay is now in the producer seat. Just cause Bay is an easy target doesn't mean you have to shoot at him, ya dig?

Next lets talk about the franchise itself. The turtles are beloved. I get that. No prob there. But lets be honest about THIS particular franchise. When Eastman & Laird brought the Turtles to us in comic format they were lean, mean fighting machines. The comic was gritty, brutal, the turtles wore the same red bandannas, and black & white. People got hurt & killed in every issue, violence was rampant, and the characters weren't very cheery. THAT IS THE REALITY OF THE ORIGINAL COMIC. Trust me, I am an ORIGINAL fan. Yet when the late 80s cartoon was made, they jettisoned all of this for colorful bandannas, cooky catch phrases, and goofy hi jinks. That worked out well, as Eastman & Laird signed off on the whole thing and it made a shit ton of cash!!! The franchise grew huge, spawning toys, live action movies, and spin off cartoons. Yet at the end of the day people easily forget how much was CHANGED from the original to the incarnation we know best. I have NEVER ONCE heard a complaint over those changes... yet now cause Bay is involved the story needs to be exact? Come the fuck on... if anything, this new Bay produced version promises to emulate the original darker comic series more. So instead of applauding the resurrection of the true styles of the characters, we are crying over one small detail. Seems a bit silly when you think of it like that, no?


And that brings me to Eastman & Laird, the original CREATORS of the characters and owners of the rights. Both have spoken out on the topic of Bay's alien origin comments, and while their opinions vary they both seem to side with Michael Bay. Eastman said he loves everything he has seen so far from the remake and thinks Bay & the gang are doing a smashing job getting the franchise back to its roots. Laird was a bit less enthusiastic, but did say that he trust Bay & co completely and  that maybe we should wait to see just how drastic these changes are before we call Bay a traitor. So let me get this straight: The two guys who own teh rights to the billion dollar franchise and created the characters from scratch are OK with it, but the'Net dwelling trolls with no objectivity are against it.... Hmmmm, I think I'll go with the creators on this one. Not really a tough choice. I have long defended Lucas, not for the changes he has made but more for the fact that THEY WERE HIS CHOICES TO MAKE!!! His property, his characters, his changes. You don't like that? Create your own fucking billion dollar property!!! Then you can do whatever you want. If Eastman & Laird are collecting checks and seem to be A-OK with this proposed alien origin, who the fuck are YOU to question them? Spend less time complaining and more time getting your OWN ideas on paper so you can make some money...


Finally, stop over analyzing every little thing about everything. It's corny now. Yes, I run a pop culture blog. And yes, some of the stuff that we cover here appears on a billion other blogsites across the 'Net. But I have made a conscious effort to use CCD to promote interesting & under promoted projects instead of all the mainstream stories, especially months in advance of the films even releasing. While I am eagerly awaiting films like The Dark Knight Rises, The Avengers, and The Hunger Games, I haven't posted a billion things about them because it ruins the anticipation. How many international trailers featuring 2 seconds of new shots do you need to watch? How many stories about who Joesph Gordon Levitt will be in the Batman movie do I have to endure? Just wait till the movie is almost out, or at least complain about CONFIRMED things. Leave the reporting to sites like /Film and Ain't it Cool News, who have real sources and access to sets long before a movie comes out. Save the speculation & criticism for after YOU SEE THE FILM. That way your complaints will have a certain validity & you won't sound like the whiny over 30 year old  babies you guys probably are. 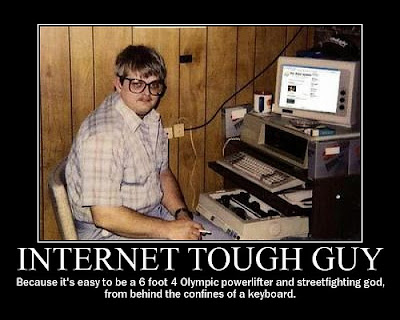 In closing, I say this:

Do something creative on your blogs...like post pics of hot up and coming celeb chicks, celebrate the music of the Wu Tang Clan, or reminisce about 80's Toys (Like CCD Baby!!!!)... or rant like this. Leave Michael Bay alone. He has enough money & power in Hollywood to not give a fuck. But if one of you trolls read this and see the light. Then my work here is done!!!!