The Bluths Are Back... You Better Get Your Netflix Accounts Right!!!

Arrested Development may very well be one of the all time best comedies to ever air on American television. Anybody who has watched the show knows this to be true. But in that statement lies the problem... Fox constantly moved the show's time slot and it never garnered the ratings that the network wanted. So it got cancelled way before it should have. Ever since it was cancelled, there have been all kinds of rumors of the return of the Bluth family: a series revival, a new network, and even a possible movie. But all of those things proved to be false... Netflix Instant is going to be the platform where we get more misadventures from this classic cast!!! Click after the jump for more details on the announcement...

Here are some blurbs from the Netflix press release:

"We also pride ourselves on breaking the rules at this studio, and after bringing back two canceled series – 'Family Guy' and 'Futurama'—to enormous success, we are bullish on the prospects for this brilliant series. We can't wait to get back to work with Mitch, Ron and Brian on bringing the Bluths back to America's living rooms," they added.

And here is some encouraging words from producer Ron Howard:

"Of all the projects we've been involved with over the years, we probably get more questions about Mitch Hurtwitz's brilliant 'Arrested Development' than any other-- everyone, ourselves included, seems to feel like the Bluths left the party a bit too soon. Bringing a series back from cancellation almost never happens, but then, 'Arrested' always was about as unconventional as they get, so it seems totally appropriate that this show that broke the mold is smashing it to pieces once again."

Finally, thanks to the gang over at ScreenRant for the screen caps of tweets from Brian Grazer & Jason Bateman: 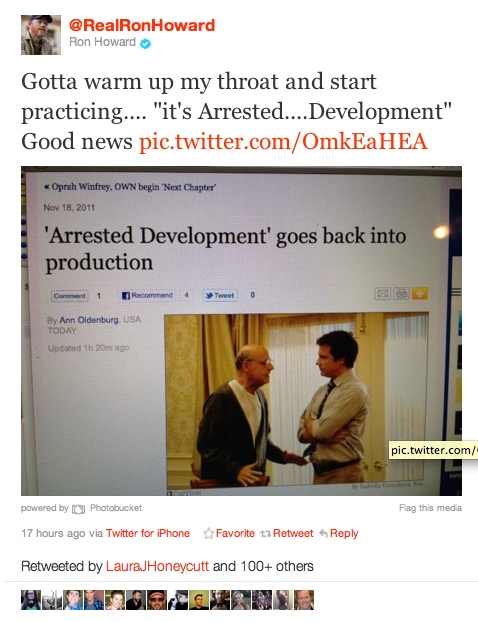 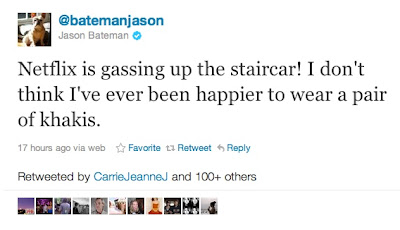 You can catch the full run of Arrested Development (three seasons) on Netflix Instant currently, and the new episodes of the show are proposed to start in 2013. I for one can't wait!!! I guess there really is money in that banana stand!!!!
Posted by Mike D. at 10:40 AM