Greetings creatures and creeps alike! Hope you ghouls & gals have been enjoying your daily dose of horror this week here at CCD...Last year for Horror Week I did a nice little spread about my extraordinarily talented filmmaking friend Bart Mastronardi and his first independent feature known as Vindication. Not too long after, Bart announced that he would be doing a 3-part film collaboration called Tales of Poe. The series intertwines & recites visual tales of Poe's very popular stories, The Tell Tale Heart, The Cask of Amontillado, and Dreams. Just this past summer, he completed production on The Tell Tale Heart, and the film is already scheduled to premiere next weekend at the Museum of the Moving Image in Astoria,Queens. Click after the jump for more...

"Based on the classic works of Edgar Allan Poe, director Bart Mastronardi has assembled an award-winning cast and crew for his upcoming trilogy TALES OF POE. A unique new spin on three of Poe's popular stories (The Tell Tale Heart, The Cask of Amontillado, & Dreams). Mastronardi weaves together a compelling and suspensful trilogy that will captivate Poe enthusiasts & horror fans alike."

Usually, I attempt to determine a film's worth by watching it's trailer. Unfortunately for me, (and perhaps even cleverly) a trailer has yet to be created for this film. I can say, however, that from viewing film stills and reading positive reviews from popular sites such as AnythingHorror.com, I'm pretty much salivating at the opportunity to see one of my favorite stories come to life on screen. Lucky for me, I've been invited to attend the premiere next week which means I'll be back with some photos and a full review of the film. Until then, to hold you Poe-Horror fans over, check out the Tales of Poe's Facebook page as well as some other sites that have already reviewed and covered production of the film: 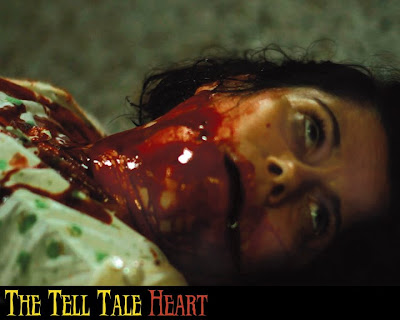