In the "ummmm ok" film promotion of the day, it seems some sort of official music video has been released, that mixes up the classic 80's high school comedy, and the perennial unavoidable death series. 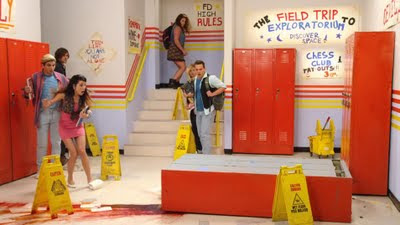 The little poppy song is credited to one of the movies stars, Miles Fisher, who I guess is some sort of musician in addition to his day job as some sort of actor. The video features a number of actors from the latest Final Destination movie, filling the roles of Zack, Slater and the rest of the Bayside Tigers as death stalks them. Though unfortunately there is no Tony Todd as Mr. Belding.

I haven't been keeping up with the Final Destination series, though it seems to still be doing its job and doesn't look to be skimping on the budget. That's impressive for a series with the number 5 in it.

I remember when the last one came out, which was supposed to be the LAST one, The Final Destination. I believe the same day it was released, DJ AM died after he had survived that plane crash a while before. Coincidence? Perhaps, but all I know is if I was Travis Barker I'd sure as shoelaces be watching my step this Friday.

Email ThisBlogThis!Share to TwitterShare to FacebookShare to Pinterest
Labels: DJ AM, JediRob