This one comes from the say no more files... Jeff Bond sent me this awesome first look of Paz "I Love Bouncing My Titties On Boardwalk Empire" De La Huerta in the title role of Nurse 3-D. This movie is supposedly about a psychotic nurse who seems to be a caregiver but is secretly an avenging angel that punishes evil men who she encounters at the hospital. My first thought was 'Dexter'... but with more tits. God knows I love 'Dexter'... but how great would that show be with more tits? Especially tits as spectacular as De La Huerta's. That is a combo I am willing to pay 3-D premium prices for. the above pic is cropped because the poster is Not Safe For Work, but you can click after the jump to see the full poster and some quotes from the creative guys over at Lionsgate spearheading this puppy. I'm on board because Lionsgate makes great horror movies and the aforementioned spectacular tits of De La Huerta... how about you guys? Tell us in the comment section below. The film, Nurse 3-D, is due out sometime in 2012. Thanks to /Film for the tip. 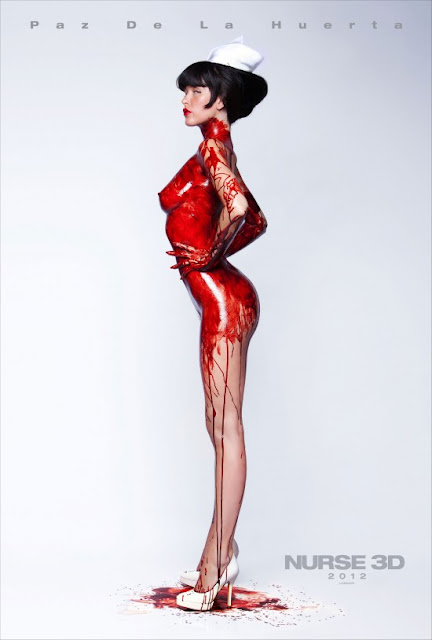 “In his original nurse photos and the fan conversation that ensued, Tim had clearly scratched the surface of a really great concept – the idea of a film noir depiction of a beautiful nurse who uses her sexuality to very severe ends,” explained Mike Paseornek, Lionsgate’s President of Production and the executive in charge of the film. “That concept was the perfect germ for this thrilling story, which will be extremely visceral in 3D.”

Here is a quote from the original source article, which you can see here:

The studio today debuted gripping pre-production concept art of Paz De La Huerta in character as Abby. Shot by Lionsgate’s Chief Marketing Officer Tim Palen, it will serve as a style guide and character inspiration for all stages of filmmaking. The story was originally inspired by previous photography of horror tastemaker Palen, who explored the intersection of caretaking and punishment in an ongoing series of fine art photographs of beautiful, fantastical nurses used by the studio.