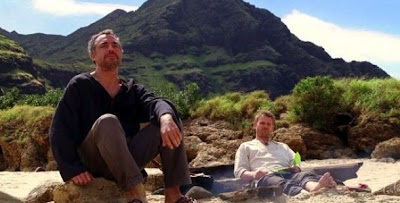 I am so sorry that it took so long for me to post this Lost video, but I got sidetracked earlier in the week and completely forgot. Apparently Damon Lindelof & Carlton Cuse had some fun hijinks plan for the Lost: One Year Later panel at Comic Con. Continue after the jump for the rest of the hysterical panel.

Cuse came in dressed as a Stormtrooper, Lindelof as a Dharma Iniative member (point Cuse). Lindelof pleaded with Cuse to finally show the 'uneditted & unaired' scene from the Season 1 finale that would finally prove that they hadn't been making it up all along. Cuse refused saying it would "ruin the integrity of the show". Lindelof answered with a snark "Since when did you care about the integrity of the show?" (point Lindelof). The agreed to show the clip, and the rest is Re-written Lost history. Watch for yourself and prepared to have all your questions answered:

Barry? Barry? That's hysterical. Well done. A great reward for the people who waited to hear Cuse & Lindelof talk about a show they loved. Also, great job by all involved in getting this one on the 'Net for all of us who couldn't get out to San Diego. And a relly big shout out to Titus Welliver & Mark Pelligrino (Jacob & Blackie) for shooting this clip a few weeks ago as a treat for the fans. Very fun.... God I miss Lost. It's OK Jeff... something will come along.
Posted by Mike D. at 12:54 PM