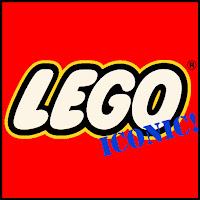 I am such a huge Lego nerd that words can not explain. Soooo I've decided to use my favorite blog site CCD.com as an outlet to get some of this stuff that I see every day, built out of bricks, out of my skull and onto the blogosphere where it can't hurt my cerebral cortex. Each month I'll be posting the best of the best hoping to inspire the Lego maniac in each of you...young and old.  Enjoy!


Back by popular demand from Spring Break, your favorite Lego enthusiast and champion of all that is brick brings you YET ANOTHER look in to the woooooorld....of Lego!
Lego builder Ed Diment has been commissioned to build a 22-Foot long (550-pound) Lego Intrepid (of World War II fame) ON the real Intrepid aircraft carrier! Not much more can be said about this behemoth that the photos don't already say for themselves (pictures launched 1,000 ships, ya know! Or was it a face that launched 1,000 photos? ...I dunno, never mind!) I'd just like to to ask...when is launch!? 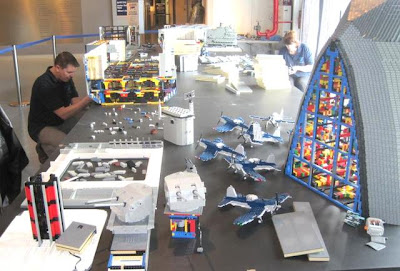 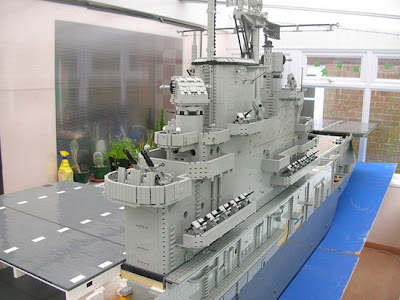 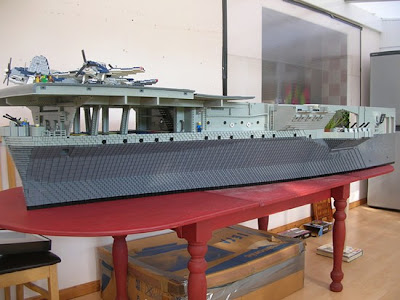 Thanks to Briana M for sending me a link to Juxtapoz where they featured these stylish 'Lego Drinking Bottles'. Nothing says 'Man-Child' like lugging one of these beauties filled with your favorite fluids to work each morning. I'll take 2! 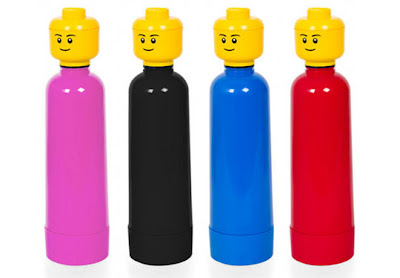 Briana M, also,  sent me this link to Juxtapoz where photos of 'Lego Soap' was featured. Nothing says 'cleaning those hard to reach places' like the tough edges and bumpy tops of Lego bricks. Ouch? 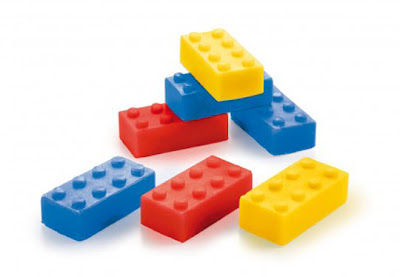 This gooey combo of ectoplasm and brick featured in a Ghostbusters Tattoo  was reportedly done by Heather Maranda of Skinfinity Tattoo Co.. Keep Busitn' (..and brickin') Heather! 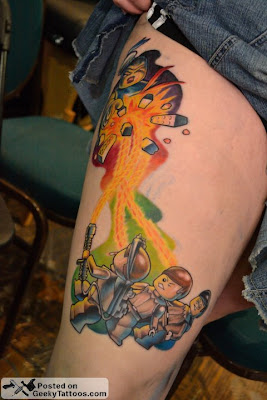 ...and speaking of bustin' ghosts made out of Lego brick, check out this small scale Lego Mini Ghostbusters design by Rod Gillies. Although it's only a few inches high, I love the detail atop the beige building where our favorite Ghostbusters troop make their final stand against Gozer and the gatekeeper & keymaster of Zul! 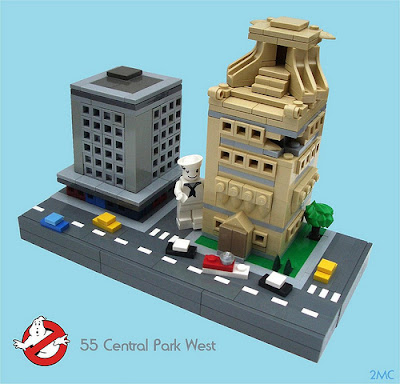 Does your living room look incomplete without a table built from Lego bricks? If you find this statement to be true, than you are a Lego addict and, in fact, are my kind of people. But, that's exactly what Quentin of Toki-Woki.net created for himself after buying a very plain IKEA table to complete his newly furnished living room. Hit the link above for a step-by-step how-to to create one for your self. Thanks to Joe F. for the scoop. 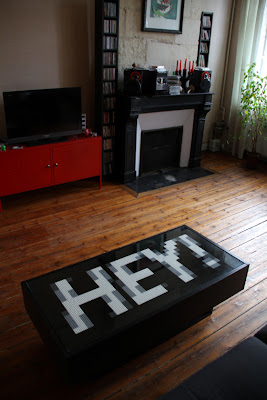 Thanks to Mike D who forwarded me this bicycle-built-for-none posted over at Buzzfeed. The Bike is completely made of neon green Lego bricks but, I wouldn't recommend adding this vehicle into your regular workout routine. It couldn't possibly support the average weight of a human.....or could it? Only one way to find out! 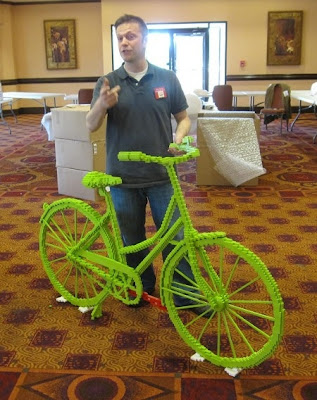 Oh, what a happy child I would have been if I'd have had one of these nifty custom-made 'Lego Reading Helmets'. The helmet conjures up the reading material's audio and puts it front-and-center in your own personal helmeted sound system. Heck, I'd use this NOW. I'd get deeper into novels, wear it to restaurants and have Menus read to me. The possibilities are truly endless. Not to mention walking around looking like a Lego Space Minifigure all day. Thanks to Edson for the link. 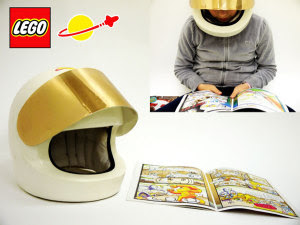 Been searching for something to sort your balls? Look no further...the 'Lego GBC Ball Sorter' will do just the trick! Check the video and hold on to your balls!!
I've been meaning to crack (pun intended..and crowbarred in) into the AMC series 'Breaking Bad' ever since I saw it's commercials running alongside my favorite cable show of the moment, 'Mad Men'. Until than, Orion Pax has brought a mini yellow version of Bryan Cranston's character and, more importantly, his RV (that presumably doubles as a meth lab judging by the shows plot and the plume of Lego smoke spewing from atop the mobile home.) As always, seems like O.P.'s homage is as clear as crystal (meth that is!) Intoxicating work Pax! 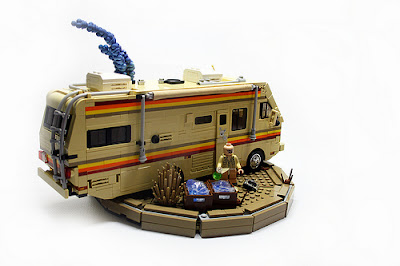 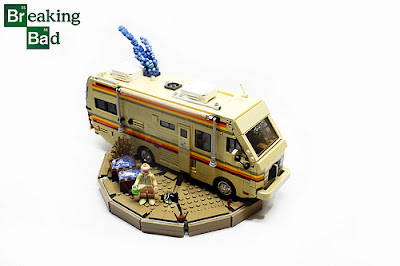 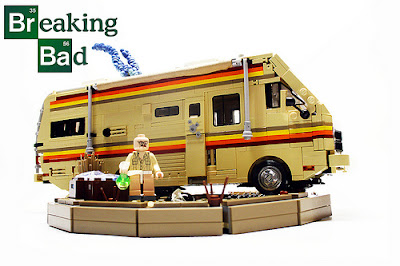 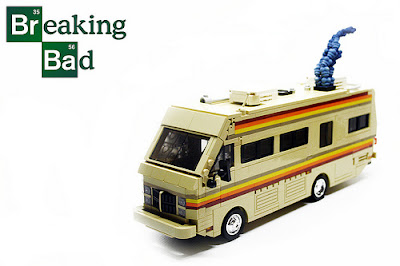 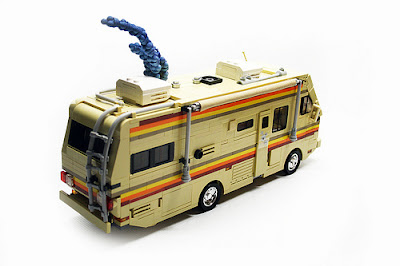 You might remember waaaay back in Lego Iconic Vol# 5 when I lovingly showcased a certain Lego enthusiast/Video game geek by the name of Benny Brickster that created a wearable 'Halo' Master Chief helmet made entirely of Lego brick. recently he topped himself by finishing off the rest of Master's Chief's wearable full body armor. Impressive! Behold! the full-on Halo master Chief armor and helmet as worn by it's creator Benny Brickster! 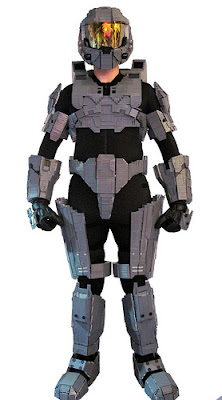 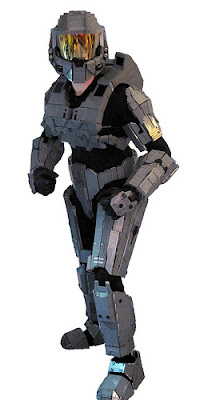 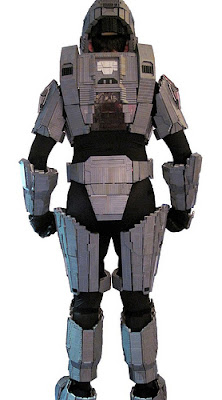 Ed put me on to this link over Engadget.com for fully functional Super 8 Film Projector created primarily from Lego blocks, perhaps inspired by the latest Spielberg/J.J. Abrams pre-summer flick 'Super 8' which is now wowing audiences in theaters. Of the film-playing piece, it's creator had this to say:

"A fully functional Super 8 Movie Projector I built using Lego Technic. The only non-Lego parts are the lens, the reel spindles and the lamp. The projector uses just two engines and is fully featured with automatic feeding, 24 fps, fast rewind and 120m reel capabilities. A decent LED flashlight makes it pretty amazingly bright."
Pop up some Jiffy Pop and let's break out some old home movies!

The Lego custom site From Bricks to Bothans held a stellar Star Wars themed contest in which entrants were asked to manipulate the bricks from 2 of their existing Star Wars Lego sets to create one new vehicle hybrid which would be strong enough in the Force to be welcome amongst the other existing saga vehicles. The 'Hybrid Fighter Contest Challenge' produced quite a few great entries 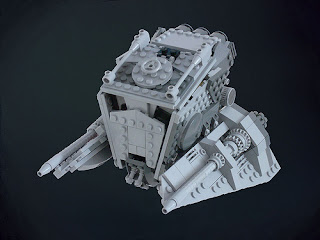 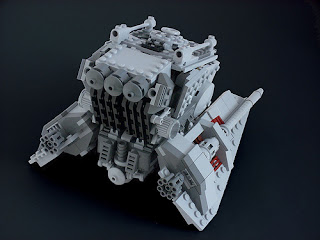 The recent arrival 'Earth Defense HQ' has brought tears to my eyes. Kotaku.com confirms, and legend will have it, that when Lego was looking for a spaceship design to couple with their new 'Alien Conquest' line, they looked to designs of the custom Lego builder Nate Nielson who tragically lost his life recently in a car accident (not made of Lego bricks). Nate, under the creator alias "nnenn", was responsible for tons of 'Gradius' inspired Lego spaceship customs before his untimely death and had become quite popular in the Lego customs community for doing so. Some may say "Well that's just a coincidence...a lot of spaceships look like versions of the Gradius ship! What makes you think this has anything to do with Nielson's work?" Well as Kotaku.com also points out...if you look closely at the decal provided for the wing of the ship, you'll see Nielson's alias ablazened on 1,000s of Lego 'Earth Defense HQ' attack ships....for posterity.
Somewhere, Nate Nielson is smiling an unwavering smile. Rest in Pieces, Nate Nielson 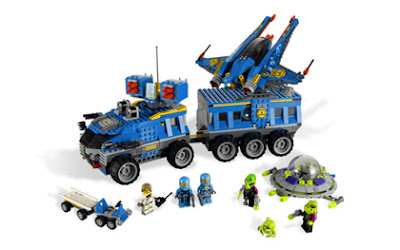 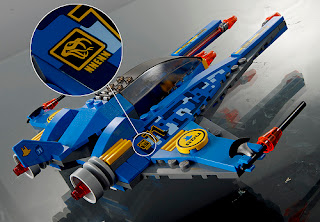 'Til next time Lego Enthusiasts.
Be sure to email me directly with any leads on impressive Lego creations
gameplaya112@gmail.com
link to previous installment of 'Lego Iconic'
Posted by JBond at 11:08 AM