This is a military statue in Bulgaria that depicts the Russian Red Army. Statues like this litter Western Europe and harken back to the days behind the Communist curtain that Russia cast over this portion of the world. They are left as a reminder of the tough times: 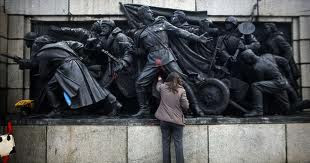 Now take a look at the same statue... superhero-sized by an anonymous street artist that is being referred to as the "Bulgarian Banksy". At first glance, you can see Superman front and center. But you can also see: The Joker, Bumblebee, Santa Clause, Supes, Ronald McDonald, Captain America and Robin.