'The Last Circus' Looks Like Freaky Fun Under The Big Top 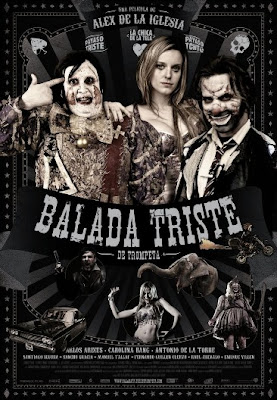 Jeff Bond sent me this trailer for Alex de la Inglesia's new film "The Last Circus". I was completely blown away by this visually stunning masterpiece. This red band trailer is one of the craziest things I have ever seen. Check it out for yourself:


Wow. Here is an official synopsis for the film:


In 1937, a "Happy" clown is forcibly recruited to serve in the Spanish Civil War, where he massacres an entire platoon with a machete still in costume.
In 1973, near the end of the Franco regime, the clown's son, Javier, follows in his father's footsteps to become a clown, but he is too miserable to be funny and is instead relegated to play the part of the Sad Clown. There he is repeatedly humiliated by the Happy Clown Sergio for the entertainment of others. Javier later falls in love with Sergio's gorgeous acrobat wife, Natalia. A love triangle ensues between the three of them, and the two clowns engage in a horrific battle with one another.

This one looks amazing. I have seen De La Inglesia's The Oxford Murders that starred Elijah Wood & John Hurt, and that one was excellent. I have high hopes for this one. This one opens up on September 7th. I'll be there!!!
Posted by Mike D. at 12:34 PM