It's Not Easy Being Green Lantern

Those fuzzy little song and dance men are back with another spoof trailer. With some lackluster Green Lantern reviews coming in, lots of folks are saying this looks better than the movie they are parodying. That would follow suit perfectly with that Hangover II parody. 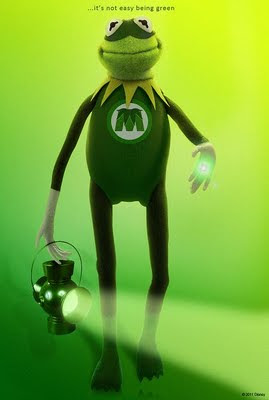 According to the press release, from Mr. The Frog himself, this appears to be the last of the spoof trailers (awwwww). But also comes with the promise of a full official trailer to premiere soon (yay)!

Hi ho! Kermit the Frog here! I sure hope you enjoy this “Being Green” trailer…and our other parody trailers—“Green With Envy” “Fuzzy Pack”. Now, after much ado—and Miss Piggy’s insistence that she get final cut—we’re finally ready for the world premiere of the official trailer for our upcoming movie, “The Muppets”. You can watch it everywhere on Monday June 20th at 8am Pacific Time. Be sure not to miss it!
– Amphibiously yours, Kermit The Frog


The new teaser also comes with a brief synopsis of the film...

When Walter, the world's biggest Muppet fan, and friends Gary (Jason Segel) and Mary (Amy Adams) discover the nefarious plan of oilman Tex Richman (Chris Cooper) to raze the Muppet Theater, they help Kermit reunite the Muppets to stage The Greatest Muppet Telethon Ever and raise the $10 million needed to save the theater.

Another great teaser. Cool to see a few more Muppets, like our favorite Viking descended, verbally challenged master of the culinary arts. Also looks like we'll have a little axis of evil including Bobo(he always did look a little shifty), Statler and Waldorf(of course) and Uncle Deadly......holy crap Uncle Deadly!

Uncle Deadly is one of my all time favorite Muppets, even though he's only ever been sparingly used. I don't think he's been prominently used in over 30 years. It is great to see him and I hope he gets a good moment or two. I've been obsessed with him ever since he had a duet with Vincent Price on a James Taylor song. I mean come on!