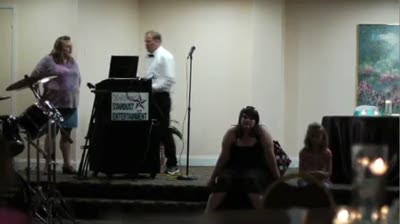 My boy Glenn sent this clip as an email to me and a group of friends. The resulting comments have been hilarious. This guy is the worst wedding singer in history, but when "In The Air Tonight" comes on he turns into the best drummer ever... see for yourself:


Good lord... he is paying that fat woman's breasts like a drum set!!! Here are a few comments that were made by some of my pals that were on the email:


Jeff Bond: I really wish there was more footage at the end to see her reaction after the moment of awe that accompanied the chest drum solo. Did she yell at him? Did she get turned on an kiss him after? I need to know!! ...but I just don't want it to disappoint me

Glenn Gracia: Who was that woman? Why did she not even flinch? Who's basement was that? How long did it take them to create that Stardust Entertainment sign on oak tag? Does this DJ do birthday parties for, say, guys turning 33 in October?